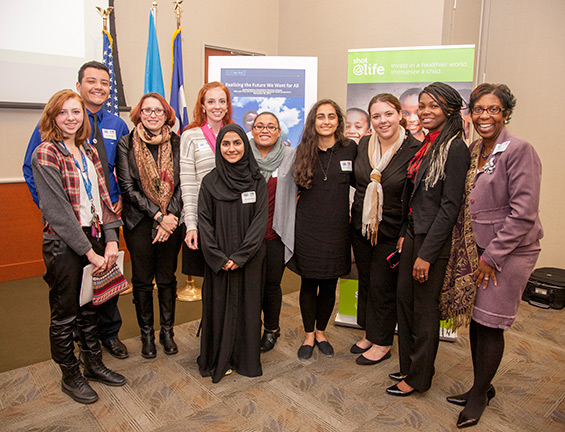 Nearly 100 Houston leaders gathered last week at the University of Houston-Downtown (UHD) for a United Nations (UN) think tank, entitled, "Uniting for a Sustainable Future," to brainstorm and gather input on pressing national issues to share with the U.S. Department of State and U.S. Ambassador to the UN.

The United Nations Association selected UHD as one of 12 national institutions to host this collaborative deliberation on the adoption of sustainable development goals, which will help in shaping the UN post-2015 development agenda globally, nationally and locally.

The Houston delegation focused on five key issues that are critical to Houston and the nation, including health, education, inequality, climate change and the development of peaceful, inclusive societies. The objective of the forum was to engage participants in a discussion of actions that will ensure the successful adoption and implementation of the selected sustainable development goals.

Forum leaders will gather group recommendations into a comprehensive report - to be sent to the UN General Assembly - which will serve as the culminating output leading into member state negotiations.

"UHD is honored to host this important UN symposium, which will lay the groundwork for advocating to the U.S. Congress and local governments to become leaders in implementing sustainable development goals at home and abroad," said Bill Flores, Ph.D., president of UHD. "By pooling the recommendations of our city's business, government and community leaders, we can establish an effective framework for combatting societal concerns surrounding education, healthcare and widespread inequality."

Symposium organizers provided attendees with an introduction to the UN post-2015 development agenda before dividing the assembly into discussion groups, which allowed more in-depth discussions. Participants then attended a final plenary session during which discussion group leaders reported to the larger group on their findings and recommendations.

"As the strongest voice for the UN in the United States, UNA-U.S.A. is uniquely positioned to energize communities to take action and promote the importance of the collected sustainable development goals at the local and national level," said Banks. "Through collaboration, we can identify our most pressing issues and community needs and take definitive steps to help ease weighty burdens on Americans."