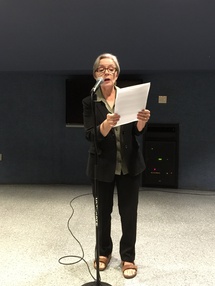 100 Thousand Poets for Change is a nonprofit organization that seeks to speak against social injustice by using the arts as instruments of social change. Participating artists sponsor demonstrations, exhibits and readings around the world during an annual global event. Poet Billie Duncan organized other events sponsored by the City of Houston that engaged the literary and visual arts on behalf of 100 Thousand Poets for Change.

"Peace and sustainability are major concerns worldwide and the guiding principles for this global event," said Michael Rothenberg, co-founder of 100 Thousand Poets for Change. "We are in a world where it isn't just one issue that needs to be addressed. A common ground is built through this global compilation of local stories, which is how we create a true narrative for discourse to inform the future."