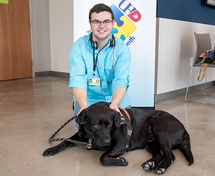 The event kicked off with a luncheon in the UHD Welcome Center where faculty and staff with personal connections to ASD engaged in round-table discussions. Attendees discussed their individual experiences, the unique impact of ASD on their lives, and tools they use to help loved ones navigate the world around them.

Master of Security Management for Executives Director and lecturer Tom Winn, was among the attendees, accompanied by his son, Jackson—who is on the autism spectrum—and Jackson's service dog, Tucker. Winn said, "Tucker goes everywhere with Jackson, even to karate, drama and swimming classes. He also distracts Jackson when he's having an anxiety episode. Tucker reminds Jackson that somebody loves him and what he's going through is not that bad."

The luncheon was followed by a panel discussion in the Robertson Auditorium. Judy Blake, executive director of KNOWAutism Foundation, moderated the panel.

Panelists discussed an array of topics ranging from screening and detection methods for ASD, to ASD risk factors, and guests were able to ask questions and engage the panelists directly.

"After listening to the discussion, I now have a clear understanding of common social struggles and challenges facing people with ASD," said a UHD student.

The event was open to the public. Michael A. Olivas, interim president of UHD, and Edward Hugetz, UHD provost, delivered opening remarks.