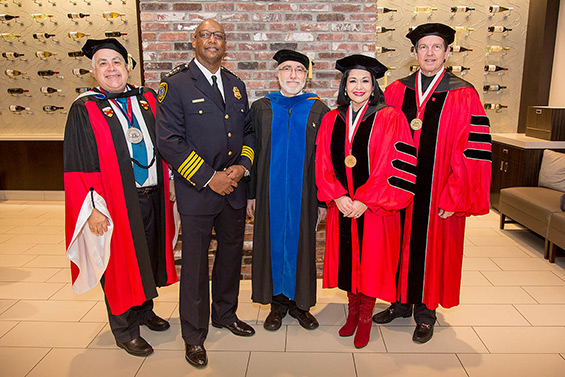 More than 1,400 UHD students participated in the University's 57th commencement ceremony Saturday in front of approximately 15,000 family members and friends.

UHD President Bill Flores also applauded graduates for their "never give up mindset" and encouraged them to employ the same discipline and dedication in the next chapter of their lives. He recognized and asked students to stand if they were honors students, veterans, the first in their families to earn a college degree, parents who cared for children while studying, and if they worked more than 30 hours en route to earning their degree.

Flores also highlighted the success story of Crisia Morales, a member of the graduating class. After becoming a mother at age 15, she made a promise to her daughter that she would give her a wonderful life. To Morales, this meant earning a college degree, despite all odds. While working full time and attending school full time, doctors diagnosed a tumor in her neck, requiring surgery and treatment. Two months later, the tumor returned and she repeated the process again. Despite these obstacles, she enrolled at UHD, intent on becoming the first in her family to earn a degree. Saturday, she accomplished this goal in front of her husband and two young children.

Houston Police Department Chief Charles McClelland served as commencement guest speaker and shared a quote from his mother to encourage the graduates. He noted that - from the time he was young - his mother told him that "education is the key that will open the door of opportunity for you." He shared that, once this door has been opened, one's knowledge, skill-sets and personality will enable a person to walk through the door.

UHD student commencement speaker, Isabel Carvajal, shared her own long journey to the commencement stage, noting that she persevered for herself and for her daughter, also a UHD student. Carvajal earned her first bachelor's degree in marketing from UHD in 2005 and, last weekend, collected her second diploma with a bachelor's degree in insurance and risk management from UHD's College of Business.

At the end of his remarks, President Flores shared a quote from Nelson Mandela who said, "Education is the most powerful weapon which you can use to change the world."

Flores noted, "With the education you've received at UHD, each of you is uniquely equipped to go out into the world and take action to institute lasting change."