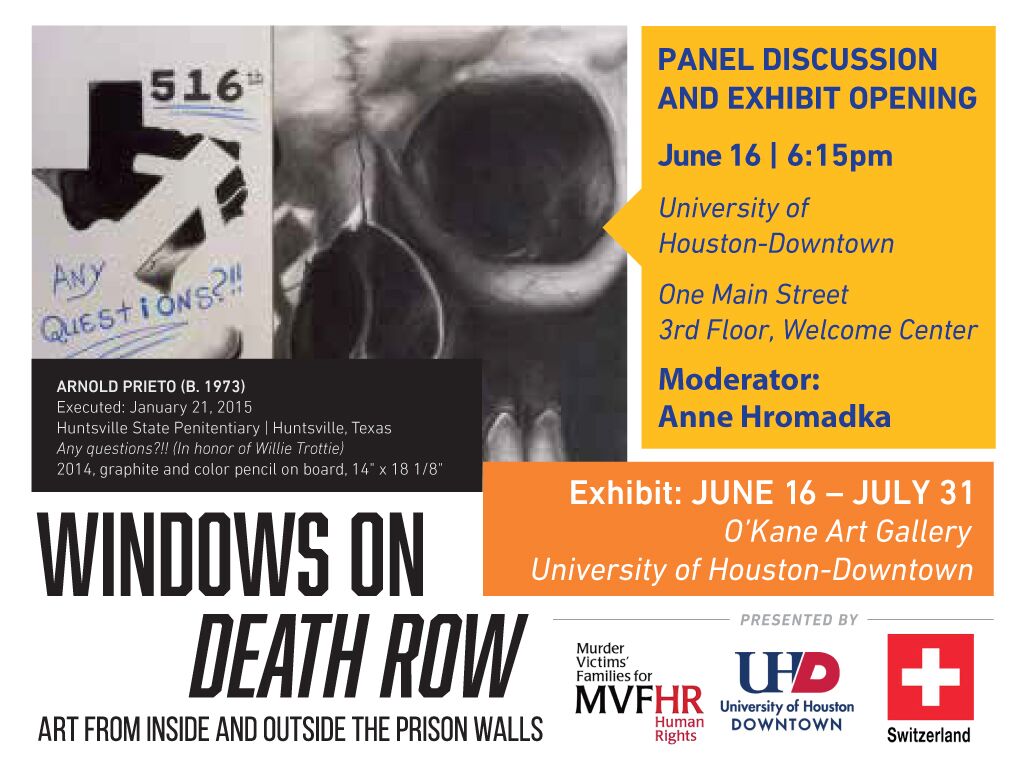 Capital punishment is a sensitive topic in America, especially in Texas. It's a subject that consistently fuels debate and intense dialogue. It's also the theme of "Windows on Death Row: Art from Inside and Outside the Prison Walls."

Soon, Houstonians will experience this traveling exhibition when it visits the University of Houston-Downtown's O'Kane Gallery, June 16 - July 31. The show features more than 60 works of art from nationally-acclaimed political cartoonists, including the Houston Chronicle's Nick Anderson, and inmates serving on death row. Exhibition sponsors include Consul General of Switzerland in Atlanta, Murder Victims' Families for Human Rights and UHD.

On opening night of the exhibition, UHD will host a panel discussion featuring artists and criminal justice experts. The discussion begins at 6:15 p.m., June 16 in the University's Welcome Center Tour Room. Parking for this event and the Gallery is available in the University's Visitor's Garage at 201 Girard St. (at the corner of Travis and Girard streets).

Panelists are as follows:

"UHD is a perfect venue for this exhibition given its diverse student population and Criminal Justice Program," Gehring said. "It's a contentious issue— one that is worth revisiting through our panel discussion and the art that will be on view at the O'Kane Gallery. Many people don't realize that those on death row are often minorities with lack of resources and lack of effective counsel. These will be some of the aspects of this issue addressed by our conversation and in the exhibition."

"The death penalty is an important and controversial issue across the United States, but especially in Texas," said Dr. Barbara Belbot, chair of UHD's Criminal Justice Program and professor. "Texas leads the nation in the number of executions by a very wide margin. Since 1976, Texas has executed 542 people, and Harris County is sometimes referred to as the nation's death penalty capitol."

Visitors are encouraged to RSVP for the June 16 opening reception and panel discussion. Visit "Windows on Death Row: Art Inside and Outside the Prison Walls" for more information.