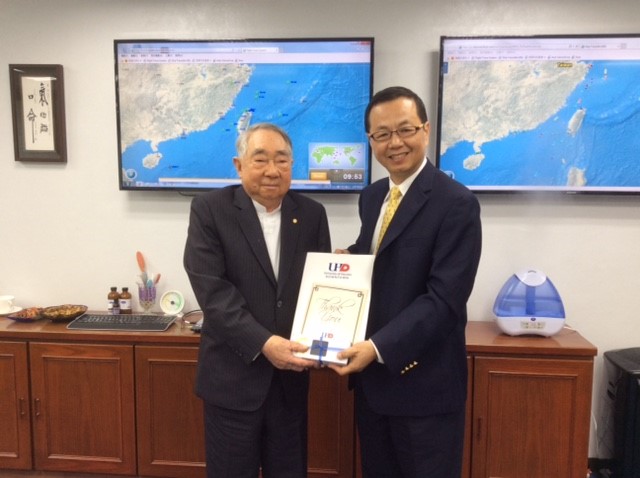 During his recent trip to Taiwan, associate professor of criminal justice Hsiao-Ming Wang delivered a thank you gift to Yung-Fa Chang, founder and chairman of the Evergreen Group and a continual supporter of the University. Chang has helped more than 25 UHD students with scholarship funds in the two years since he made a $2 million endowment from the Dr. Chang Yung-Fa Foundation, which he founded in 1985 to give to disadvantaged minorities on behalf of the Evergreen Group.

In 2012, UHD established the Dr. Yung-Fa Chang Endowment for Student Grants-In-Aid in honor of the Taiwanese entrepreneur. Grant recipients must demonstrate financial need as well as academic ability. In appreciation of the award, professor Wang presented Chang with a compilation of photographs and thank-you notes from the grant's previous and current recipients, with an inscription from University president Bill Flores.

"It is with great appreciation that we present this booklet, which highlights eight new scholarship recipients for this academic year, as well as eight renewing scholarship recipients. Through sharing their personal stories, we hope to express their gratitude and demonstrate how your gift supports their academic progress," wrote Flores.

Dr. Chang has significant ties to UHD that began in 2005 when Taiwan's former director general of the Ministry of Justice, Investigative Bureau -the equivalent of the Federal Bureau of Investigation in the United States- introduced him to a UHD delegate visiting Taiwan. At that time, Dr. Chang agreed to make his first gift to UHD to fund scholarships, thereby paving the way for an international student exchange. In 2008, UHD granted Chang an honorary professorship in recognition of his dedication to education.

Since its inception, the Dr. Chang Yung-Fa Foundation has provided more than $130 million in support for medical aid, student aid, and arts and culture initiatives in Taiwan and around the world.