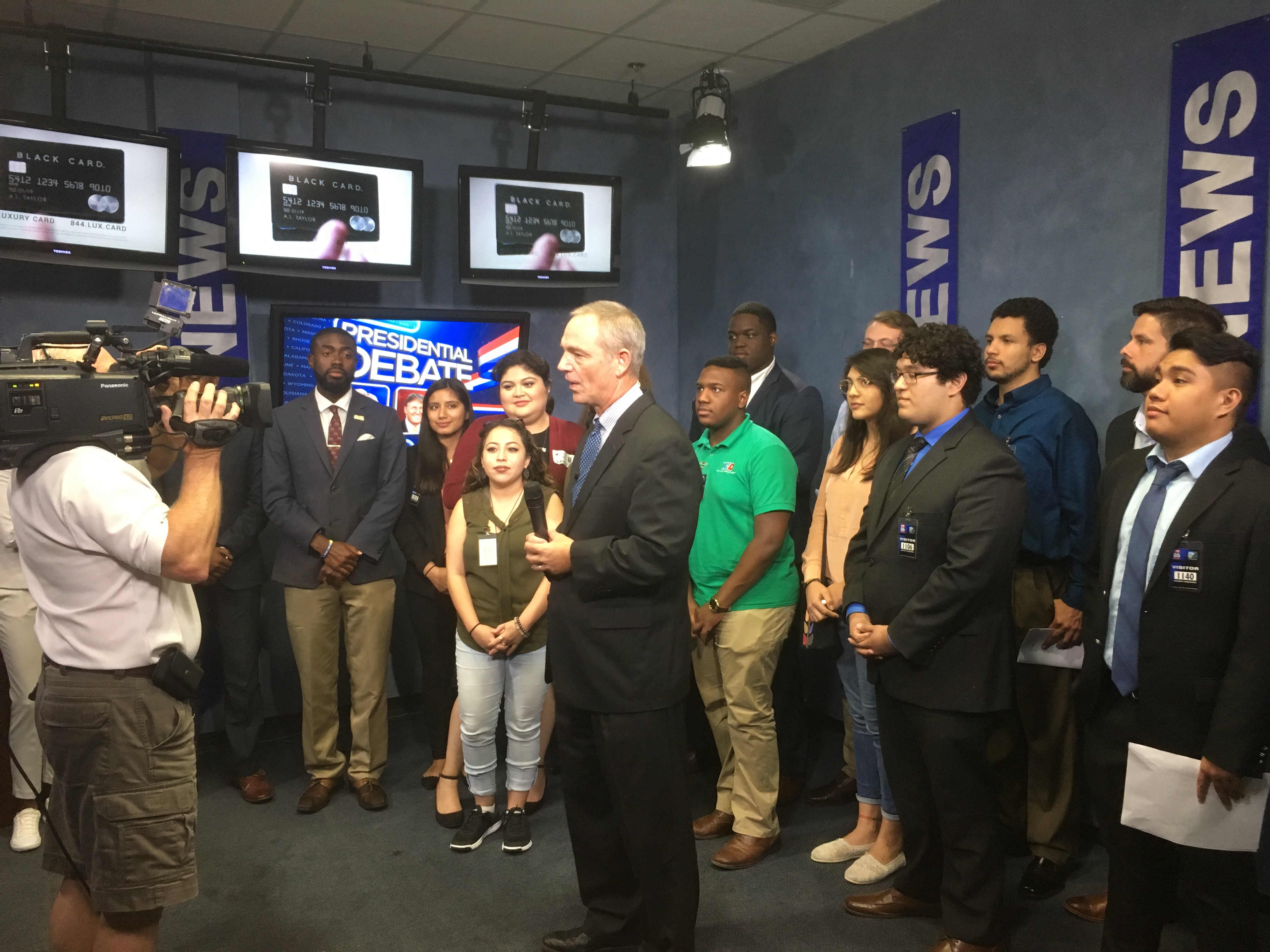 The Sept. 26 presidential debate between Hillary Clinton and Donald Trump was the most watched debate in American history. It was a big night for political experts and pundits, but it also provided an opportunity for University of Houston-Downtown Honors Program students to share their insights on the event. Six UHD Honors students were invited to KRIV FOX26 studios to view the debate and offer feedback following the event.

The Honors scholars convened at FOX26 studios in southwest Houston and met students from other local institutions including Rice University, Lone Star College, Houston Community College and Texas Southern University. They were greeted by award-winning FOX26 journalist Greg Groogan who led a station tour and prepared them for the post-debate interview. His colleague Melinda Spaulding also met students and welcomed them to the FOX26 studios.

UHD Honors students participating in this media opportunity included Jessica Plascencia-Delgado, Thomas Canny, Katy De La O, Magge Nunez, Wallace Wilson and Jocelyne Torres. They assembled with the other participants in a conference room to view the debate as the nightly news team prepared for its post-event coverage.

Following the debate, Groogan selected a handful of students to offer comments on live television. Canny was among the lucky few who offered his opinion on the newscast and offered a blistering critique of Republican candidate Trump.

"There are no details, no real information," he said of Trump's debate rhetoric. "I think Hillary was a clear winner in this debate."

Following the live interviews, Groogan taped interviews with all of the assembled students for possible use during a future broadcast.

The debate was no doubt exciting to audiences around the country, but it was particularly invigorating to UHD's students. They credit the Honors Program for providing them with this opportunity.

"My major is political science, so I was able to apply what I've learned in the classroom to a real-world setting," Plascencia-Delgado said. "Not every student can go on FOX news and share his thoughts on a historic presidential debate. I owe this experience to being part of the Honors Program."

Additionally, the experience of visiting one of the city's top news stations was rewarding for students.

"It was incredible," Torres said. "I was gasping the entire time, but being part of the discussion on the debate was nice. It was great to meet other students and share our thoughts."

"I'm not sure I'd have this experience at another university," Plascencia-Delgado added. "It complements all of the critical thinking projects we work on at UHD and the Honors Program."