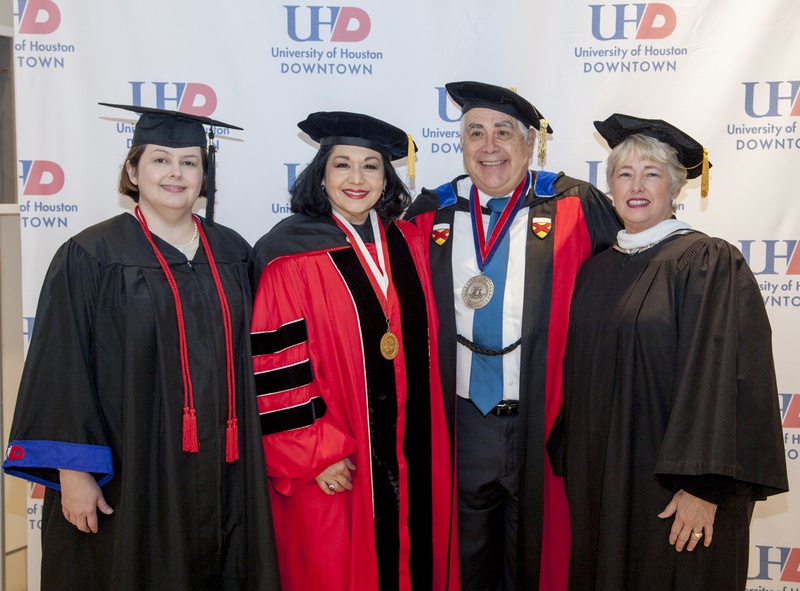 In his address, President Flores congratulated students on their achievements, saying, "You represent the very best our city and our country have to offer. I am so excited about the contributions you will make to your communities, whether close to home or around the globe."

President Flores reminded students that learning is a lifelong process and urged them to use their education to make a positive difference. "I encourage you to employ this same discipline and dedication in the next chapter of your lives," the president said. "I hope you will use the knowledge you gained at UHD to change the world."

In one of her final public appearances as the City of Houston's chief executive officer, Mayor Parker shared insights about her career in public service. The mayor challenged students to "turn off the phone, turn off the TV, and engage with people who are important to you." She spoke of having relied on her faith during her three terms of leading the city, saying, "Life is about finding something greater than yourself."

Student speaker Stacee Uebele praised her fellow graduates as "hardworking people whose life experiences allowed them to bring unique perspectives to the classroom." Uebele, who received a bachelor of science degree in interdisciplinary studies from University College, spoke of the importance of being engaged in one's community not only as students but also after entering or advancing in the workforce. "Regardless of what we plan to do professionally, there is a place in your community for your contributions. 'Community' isn't something 'out there' — it's the place where we live and work," she said. "In your neighborhoods, there are people who need your time and talents. There are organizations that need your ability to make a way, when it appears there is none."