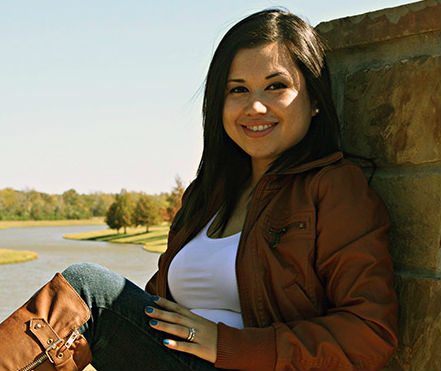 Despite becoming a mother at 15 and overcoming two tumors before age 21, failure was never an option for Crisia Morales, a soon-to-be graduate of the University of Houston-Downtown (UHD).

The first in her family to earn a college degree, Morales' educational journey - which will culminate at UHD's December commencement - is a model of tenacity for undergraduates following in her stead.

It all began with a promise to her newborn daughter, Emily, in a lonely hospital room nearly a decade ago.

I promised my daughter I would do everything - including the impossible - to give her a wonderful life.

"When I had my daughter at such a young age, everyone I knew wrote me off as a statistic - another young Hispanic teenager, without a high school diploma, husband or future," said Morales. "Because of their disapproval, I was all alone in the hospital with Emily, just hours after her birth. It was the two of us against the world and I promised her then that I would do everything - including the impossible - to give her a wonderful life."

A high school sophomore, she worked part time at a daycare - where she could bring her daughter - and attended school full time, graduating as an honors student a year ahead of her classmates.

The next month, Morales enrolled in classes at Lone Star College-Cy-Fair.

"Five days a week for two years, I woke up at 5 a.m. and took my daughter to my mom's house before attending early morning classes at LSC. When those classes ended, I worked a full eight-hour shift at a collection agency before returning to campus for two evening classes."

"Crisia Morales sets the bar when it comes to following your dream and setting your own course in life," said Bill Flores, Ph.D., president of UHD.

She gave birth to her son, Ermy Jr., while studying at LSC and discovered a renewed commitment to keep her promise - now for both of her children.

Despite these setbacks, Morales walked across the stage to collect an associate's degree before her support group, including her parents, children and soon-to-be husband, Ermy - the father of her children.

The following month, she enrolled at UHD to accomplish her dream of becoming a teacher.

"Crisia Morales sets the bar when it comes to following your dream and setting your own course in life," said Bill Flores, Ph.D., president of UHD. "Like many students at UHD who sacrifice greatly to earn their diplomas, she made the most of the resources she had to create a new life for herself and her family."

In two weeks, Morales, 24, will fulfill her promise to her daughter, now 8, and become a college graduate. And three weeks later, she will enter her own classroom as a bilingual first grade teacher at Treasure Forest Elementary in Spring Branch Independent School District.

"Everything happens for a reason," she said. "If it wasn't for the tough challenges I went through at an early age, I wouldn't be the strong woman I am today. It hasn't been easy, but it has definitely been worth it. I am living proof that with a strong will, perseverance, dedication and effort, anything is possible."

Morales, along with more than 1,400 December graduates, will participate in UHD's fall commencement ceremony on Dec. 20 at 10:15 a.m. at Minute Maid Park.