UHD Gives Back to Alumnus Fighting Crime Across the Globe

The University of Houston-Downtown (UHD) exists to equip graduates with skills to succeed and make a difference in the world - and sometimes that support extends well after graduation and well across the globe.

Gavino Rivas, an alumnus of UHD's esteemed Criminal Justice Training Center and a captain in the U.S. Army Reserves, plays an instrumental role in training Afghan Police and Border Patrol agents to combat crime in the war-torn region. Stationed in the Spin Boldak province of Afghanistan, he works daily with FBI agents - as well as an Afghan colonel and chief of the country's Criminal Investigations Division - to ensure trainees have the tools they need to battle significant crime.

Rivas, a graduate of the United States Naval Academy, previously served two tours of duty in Afghanistan as a helicopter pilot transporting troops in the region. Following his service, he enrolled at UHD to train as a law enforcement officer and decided to reenlist in the Reserves to provide additional support, as needed.

The Army called his "Rule of Law" team to Afghanistan in December 2012 to support the existing government's efforts to curtail crime and protect local citizens.

"These are small town officers dealing with large, intricate crimes," said Rivas. "They regularly face cases of murder, drug busts involving thousands of kilos, large counterfeit rings and theft of $100,000 and more. I have to say I am amazed at what they do with so very little."

To help trainees and motivate their efforts, Rivas reached out to his former criminal justice professor and director of UHD's Criminal Justice Training Center, Rex White. In an email to White, Rivas noted, "It has truly been an awesome experience, particularly getting to help train both the Afghan Uniformed Police (AUP) and Afghan Border Patrol (ABP). Sir, one thing that would really help is to have gear to pass out to our better performers. If it won't be too much trouble for your class, used [supplies] would really go a long way out here."

Upon receiving this request, White marshaled the support of cadets, the UHD Police Department and the Houston Police Department to create a supply drop for used equipment, including universal holsters, slings, batons and handcuffs. All criminal justice cadets must complete community service as part of their training and the Training Center recently adopted Rivas' team as its official outreach through the extent of the alumnus' 13-month tour of duty.

"Governments don't fight crime, people do," said White. "I believe the same can be said for helping others. It is an honor to support Captain Rivas' team in improving the quality of life in Afghanistan through professional police training and 'heart.'"

White soon will send the third shipment of police equipment to Rivas, a contribution that he notes is as good for the American troops as it is the Afghan police. "It's great for American soldiers to see how their country supports their efforts and, at the same time, it shows Afghan police the true mission of law enforcement, which is ensuring the safety and well-being of citizens.

"The police equipment our University sends to Captain Rivas' team will be handed to the best and brightest of the police trainees in each class," said White. "These incentives go a long way with troop morale and support of police training, which hopefully will save lives and remove criminals and fear." 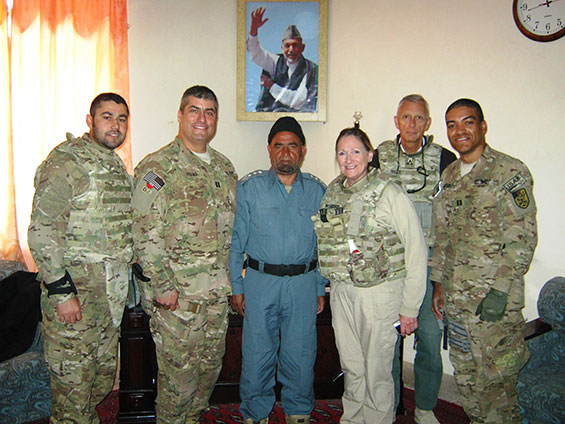 Gavino Rivas (second from left), UHD criminal justice alumnus and captain in the U.S. Army Reserves, is completing a tour of duty in Afghanistan, training police officers to combat crime in the war-torn region.

UHD Gives Back to Alumnus Fighting Crime Across the Globe