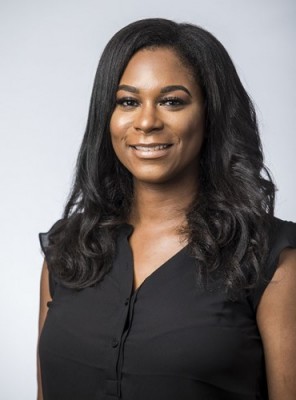 Lorraine Byrd’s journey has taken her into corporate America, back to college and soon … to dental school. Although the road to becoming a dentist has had some detours, she completed her post-baccalaureate studies at the University of Houston-Downtown and is looking forward to giving others reason to smile.

“I am very grateful to UHD for preparing me for this next chapter in my life,” she said. “I am not graduating this semester, but finishing the prerequisites for dental school feels like a major accomplishment. My acceptance into dental school couldn’t have been possible without the support of UHD.”

Byrd’s interest in dentistry didn’t happen overnight. She once was stigmatized by peers as a child because of her teeth. The experience inspired her to help others who face similar experiences or other problems because of dental issues.

“I had the unfortunate habit of sucking my finger when I was very young. That affected the alignment of my teeth,” she said. “At the time, I felt that affected how people interacted with me. I wore braces for two and a half years. When they were removed, I noticed a stark contrast in how I was treated. It lifted my self-esteem, and I started enjoying going to the dentist.”

During her visits to the dentist, an adolescent Byrd would ask questions and became intrigued by the profession. Still, she faced some struggles during her high school years due to several family moves. She went from Cypress, Texas to Jamaica and back again.

“The moves created a challenge,” she said. “It wasn’t an easy time for me as a student, because some of my Jamaican credits did not transfer, so I opted for my GED. After that experience, I was intimidated by the thought of going to college. But then, I discovered UHD.”

UHD provided Byrd with a gateway into higher education. She credits the affordable tuition and supportive faculty for helping her feel at home.

Byrd decided to focus on the world of finance. She transferred to another institution, where she earned her bachelor’s degree in Business Administration. She then launched a career in the oil and gas industry, and later, she became a Certified Public Accountant.

Despite her success and financial stability, Byrd still felt a personal and professional void. Dentistry was calling, but she still needed to knock out a variety of college credits in chemistry, biology, genetics and other topics (all prerequisites for dental school). In 2018, Byrd took a career hiatus and returned to UHD.

“Although I had financial security, my career wasn’t completing me or my soul,” she said. “I took a lot of time to have an awakening and discover that there was something more purposeful awaiting me. It really hit me like a ton of bricks. I want to help others achieve this feeling of being seen and heard in this world.”

Once again, Byrd found UHD to be a welcoming institution. Although she had some concerns about being a nontraditional student, faculty and her classmates made her feel at home. Additionally, UHD’s resources such as its advising offices were particularly helpful when identifying the right courses to take.

She also appreciated the opportunity to be part of organizations such as the Scholars Academy and UHD American Student Dental Association (ASDA). She served as President of the latter organization during her final year at UHD. As leader of UHD ASDA, she helped coordinate guest speakers, manual dexterity workshops, and scheduled meetings to discuss coursework and curriculum required for dental schools.

Byrd also was proud to volunteer with her fellow students at several Texas Mission of Mercy events. The group of students were also involved in local community efforts led by faculty member, Dr. Mesias Pedroza, whom Byrd cites being particularly influential during her time at UHD. Other faculty members who made an impact on her included Dr. Lisa Morano, Professor of Biology and Microbiology and Dr. Mary Jo Parker, Executive Director of the Scholars Academy.

“Lorraine was a dedicated student always focusing on understanding course material,” Morano said. “More impressively, Lorraine worked hard to help others, leading an organization for pre-dental students. Her hard work and compassion for others will serve her well as she enters dental school.”

Byrd now will begin a Summer Research Program and will be enrolled in dental school in the fall.

“It’s an exciting time,” she said. “I’ve learned a lot throughout my career and my time at UHD. Now, I can apply these lessons to a career in which I can help others.”