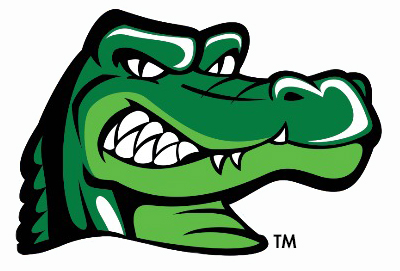 Noted French artist Sebastien "Mr. D" Boileau this week swiped the first brush strokes on a building-sized mural of the University of Houston-Downtown (UHD) mascot - Ed-U-Gator - on the north side of a storage facility on campus, adjacent to student parking at Main Street and I-10.

The alligator mural is a creation of Boileau's creative art company, Eyeful Art Murals and Designs, which is known for crafting individual artistic environments that reflect the vision and personality of its clients.

Houstonians can follow Boileau's creation on social media using the hashtag #UHDgatorwall and by visiting www.uhdgatorwall.com.

"It's a fun and fascinating landmark for all of Houston to enjoy and a pleasure for METRORail riders headed southbound toward downtown Houston," said Diane Summers, executive director of university relations at UHD. "It provides a sense of pride for our students who park near it each day."

Boileau notes that the mural's design is symbolic of students going out into the real world following their college graduation. "There's a meaning behind it," he said. "The gator is pictured bursting through the wall, representing UHD students who are preparing to break out into their professional careers."

The University will place a second mural of the UHD logo and tagline, "Major Opportunity," on the south side of the building, which faces I-10.

"The wall gives the campus more visibility," Boileau said. "It makes a cool statement in the urban landscape."

Boileau is known for his large-scale murals, many of which are popular spots for residents and tourists to take photos. One of his most well-known projects in Houston is on the side of Biscuit Home, a home décor store in Montrose. Called "Biscuit Paint Wall," the mural features a row of bright colors poured from the top of the wall to the ground, representing the bright colors of items sold in the store.

Boileau also recently painted "Preservons la Creation" ("Preserve the Creation"), a mural of a muscular god-like image floating across the wall with an outstretched hand holding a spray can. "Preservons la Creation is the largest mural in Houston," said Boileau of his 10,000-square-foot, five-story mural that spans the entire city block at 2800 San Jacinto St.

"The focus of our project was to do something imposing and dramatic that could make a statement and engage the students, enliven the area," said Cervenka. "It creates a good public presence for the University in a way that is accessible to our students, especially our younger students, many of whom are familiar with street art. It's a win-win all the way around."