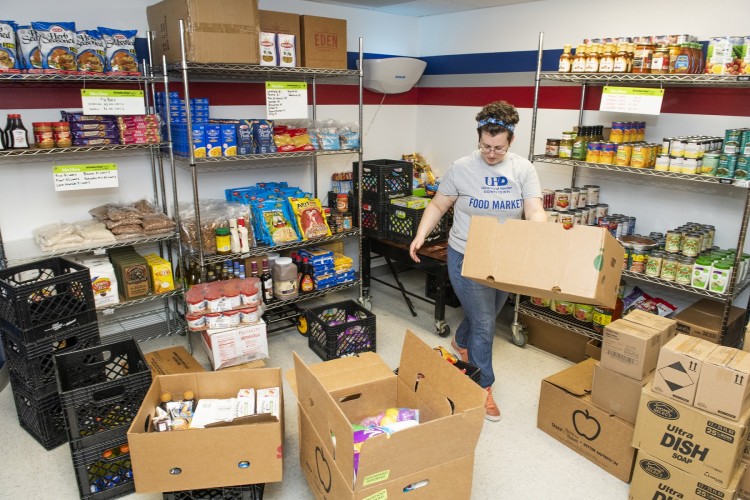 Tuition and textbooks are just a few of the expenses that college students must incur. They also must budget for school supplies, laptops, cell phones and other tools to support their studies.

And of course, students must afford food.

Food insecurity—or lack of access to fresh, nutritious food options— is prevalent at universities across the nation. According to the Center for Law and Social Policy, between 20 and 33 percent of American college students experience food insecurity. Students at the University of Houston-Downtown (UHD) are not immune to this problem, and the institution has created a solution to support food insecure students.

Over the past year, UHD has offered food scholarships to students. This semester, 300 students are currently participating in the program, and received $60 per each credit hour taken during the semester. Scholarship recipients are provided a card that is redeemable at the University’s second-floor Food for Change Market—a small store providing fresh produce and non-perishable items donated by the Houston Food Bank. Students can obtain additional details regarding applying for this scholarship by emailing uhdfoodscholarship@uhd.edu.

There are two primary goals for the scholarships and pantry: to alleviate food insecurity among students and help them succeed at UHD.

“It’s important that this service is beneficial to our students and alleviates some of the daily stress they face.” said Courtney Lundgren, director of enrollment communication and client relationship management. “Ultimately, our goal is to take away some of their stress and help them graduate.”

The scholarship was developed in 2016 following on-campus surveys (conducted by UHD Veterans Services and other offices) and officially kicked off in 2017 to aid students recovering from Harvey. Data from the surveys reflected that students were lacking in healthy eating habits and access to fresh food, Kwasikpui noted.

“We’re tracking students in the program to determine whether this scholarship not only feeds students and their families, but helps them perform better academically and graduate,” he said.

As the Food Scholarship enters its third year, it will be open to more applicants. According to Kwasikpui, all students who complete the application will be eligible in 2019.

“In the fall semester alone, we had 60 to 70 percent of scholarship recipients fully utilizing their funds and our market,” he said. “And, we had another 400 to 500 students express interest in the scholarship.”

UHD’s Food Scholarship Market is operated by current UHD students and staff volunteers. “This market would not be as successful as it’s been without the student staff Amanda Howard, Denia Contreras, Cristian Contreras and Ryan Sharp.”

Recently, Kwasikpui and Lundgren’s efforts in managing the scholarship were recognized during the Houston Food Bank Awards. UHD was named Higher Education Partner of the Year during a recent ceremony.

“That was exciting,” he said. “To be recognized for the scholarship’s first year was a great accomplishment for our university. It was acknowledged for its creativity and willingness to serve our students, as well as its flexibility.”

“We want to see how this helps our students and how we can perhaps tailor this scholarship to better serve them,” Lundgren said. “This initiative, like so many others at UHD, is about ensuring our Gators succeed.”