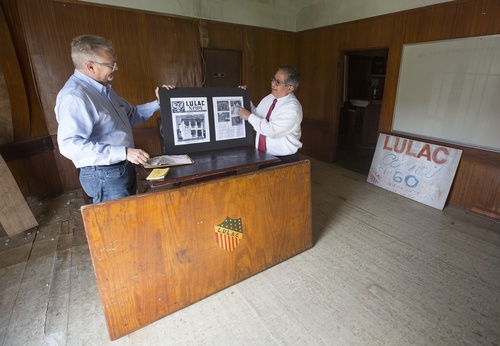 The modest white house at 3004 Bagby Street with boards over the windows, cracked walls and graffiti doesn't look like anything special. In truth, however, the house holds special meaning for many Houstonians.

Once, the League of United Latin American Citizens (LULAC) Council 60 used this home as its clubhouse headquarters during the Mexican American Civil Rights Movement. In this structure, programs and initiatives were launched to support Latino communities in Houston and across the nation. Likewise, it served as the site for planning the LULAC State Director's Gala on Nov. 21, 1963 with special guest President John F. Kennedy. This event was conducted the day before he was assassinated.

The building has been vacant since 2013 and has fallen into disrepair. Thanks to the efforts of preservationists (including members of the University of Houston-Downtown community), the building recently received a National Treasure designation by the National Trust for Historic Preservation

C 60 Inc. had been involved in numerous discussions with organizations regarding the house. Things began to move quickly after Houston Public Library archivist Mikaelea Selly introduced the group to Sehila Casper, a preservation field officer for the National Trust for Historic Preservation.

""It was this chance introduction that it all started coming together," Valdez said.

By fall 2017, the LULAC Clubhouse was scheduled for its designation, but nature had other plans. Hurricane Harvey stalled things. By spring 2018, however, the National Trust was ready to announce that the clubhouse was officially a National Treasure. Complementing this designation is a $140,000 American Express disaster recovery grant to support the house's restoration.

The original seven trustees of LULAC Council 60 purchased the home in 1955 for $10,000 with support from local restauranteur Felix Tijerina. The house became a site where civil rights legislation and court cases were addressed. Initiatives launched at this site include Project Head Start (teaching English to Spanish-speaking children); SER—Jobs for Progress (job training and placement center); and the National LULAC Housing Commission (improving affordable housing options for Latinos).

"There aren't many pieces of Hispanic history standing," Preuss said. "Preserving this house helps show that Latinos were active in civil rights and that other sites are out there that need to be preserved too."

The National Treasure designation and disaster recovery grant are only the start of a new future for the clubhouse. Both Preuss and Valdez agree that they and the other members of C 60 Inc. must continue to develop partnerships and support to ensure this piece of history is rightfully preserved.

"We're going out, writing grants and gathering support from all levels of the community," Preuss said. "It's an exciting time for this project that's being driven by people passionate about preserving this place and what it stands for."