UHD Community to Stroll to the Polls During Oct. 26 'Walk 2 Vote' 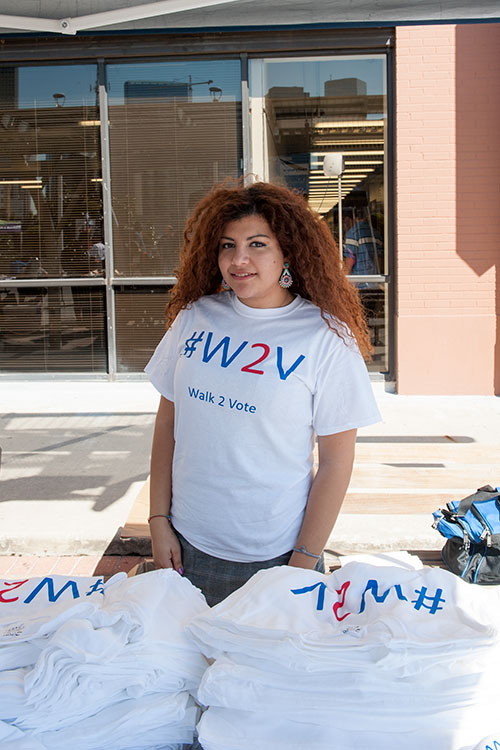 The University of Houston-Downtown (UHD) community will literally "exercise" its right to vote during Walk 2 Vote on Oct. 26. Led by UHD's Student Government Association (SGA) in partnership with University leadership and community partners, Walk 2 Vote is a mass procession from the campus to the Harris County Tax Office (1001 Preston St.) to vote in early elections for national, state and local races.

The walk from UHD's Shea Street Building to the Harris County Tax Office will begin at noon. Walkers will make their way to the polls, crossing the Main Street bridge over Buffalo Bayou.

The goal of this initiative is very simple, said John Locke, UHD student and SGA director of external affairs.

"Our mission is to inspire people to vote," said Locke, who also serves as the chair of the local and national Walk 2 Vote initiative. "Civic engagement and getting involved in democracy are very important, but it's not happening as much as it should. Walk 2 Vote is about encouraging citizens to participate in the process."

The literal walk to vote is only part of what Walk 2 Vote is about, Locke said. The weeks and months leading up to the actual procession were marked by student-driven campaigns aimed at encouraging voter registration and voting in Houston.

"This event has been a model for schools nationwide," he said. "It's been exciting to see this grow. The idea, however, is for Walk 2 Vote to be effective and connect and empower young voters."

Locke is among the students who launched Walk 2 Vote at UHD in 2012. The event has grown since its inception, and Locke is optimistic that this year's event - particularly since it's conducted during a presidential election - may attract its biggest turnout.

Prior to the actual walk, UHD's Center for Public Deliberation will host "We the People: Our Role in American Politics" from 9:30 to 11:45 a.m. in UHD's Welcome Center (Milam Travis Room). The forum will feature members of the UHD and Houston communities sharing thoughts on the impact of citizens on the political process. Participants will break into groups and engage in round-table discussions on the topic.

"We know that the act of public deliberation encourages people to vote and to get informed," said Windy Lawrence, director of UHD's Center for Public Deliberation. "When people structure multiple deliberations with action in mind, it also encourages organized, public action and change."

UHD Community to Stroll to the Polls During Oct. 26 'Walk 2 Vote'