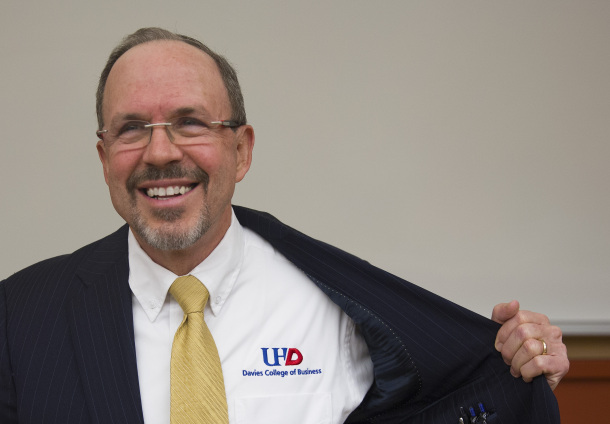 Last August, Dr. Michael Fields announced his retirement as dean of the Marilyn Davies College of Business at the University of Houston-Downtown (UHD). On May 2, more than 75 members of the UHD community gathered to offer well wishes to Dean Fields at a retirement event on May 2 in the Welcome Center.

"Since arriving to UHD five years ago, Dean Fields has accomplished a lot," said Ed Hugetz, Senior Vice President for Academic and Student Affairs and Provost. "He is the first candidate that I have ever interviewed who actually did what he said he was going to do. He came here with a plan and executed it to the letter, which will have a lasting impact on UHD—the things he taught us about being relevant to the community we serve; believing in ourselves to be the best we can be and to give opportunities to those to become professionals in the city."

Under Fields' leadership, the College received a $10 million gift—the largest in UHD history—naming it the Marilyn Davies College of Business after lifelong Houstonian and entrepreneur, Marilyn Davies. The University now holds the distinction of hosting the state's first college of business named for a woman and the fourth in the nation to do so. And, it's also UHD's first named college.

"He has really impressed me with his vision and plans for UHD and the College of Business," Marilyn Davies said. "The vision and plans that are in place here can only be determined by their results. And the results are in…we are the largest MBA program in Houston…bigger than the University of Houston…bigger than Rice University. Dean Fields, you will be missed and your legacy will live on. The students who graduate from this school are your legacies. The education they received help them with future opportunities. And you did that. My money didn't do that. You did that."

"Michael was on the search committee that interviewed me for the UHD presidency. The one thing that I recalled during that process was his forward-leading questions about his vision for the future," said Muñoz. "Leadership, like Michael's, requires courage, resolve and vision, which has always been my impression of Dr. Fields. This University, your college, our reputation, and my leadership has been influenced by you."

The Davies College of Business is one of the leading institutions in Houston for graduate and undergraduate business studies, which Fields noted in his closing remarks.

"After five years, it seems like it was just yesterday," said Fields. "The accomplishments of our faculty, staff, and University are pretty incredible. What brought me to UHD was the feeling that we can make a difference. The Marilyn Davies College of Business and UHD make a difference in students' lives."