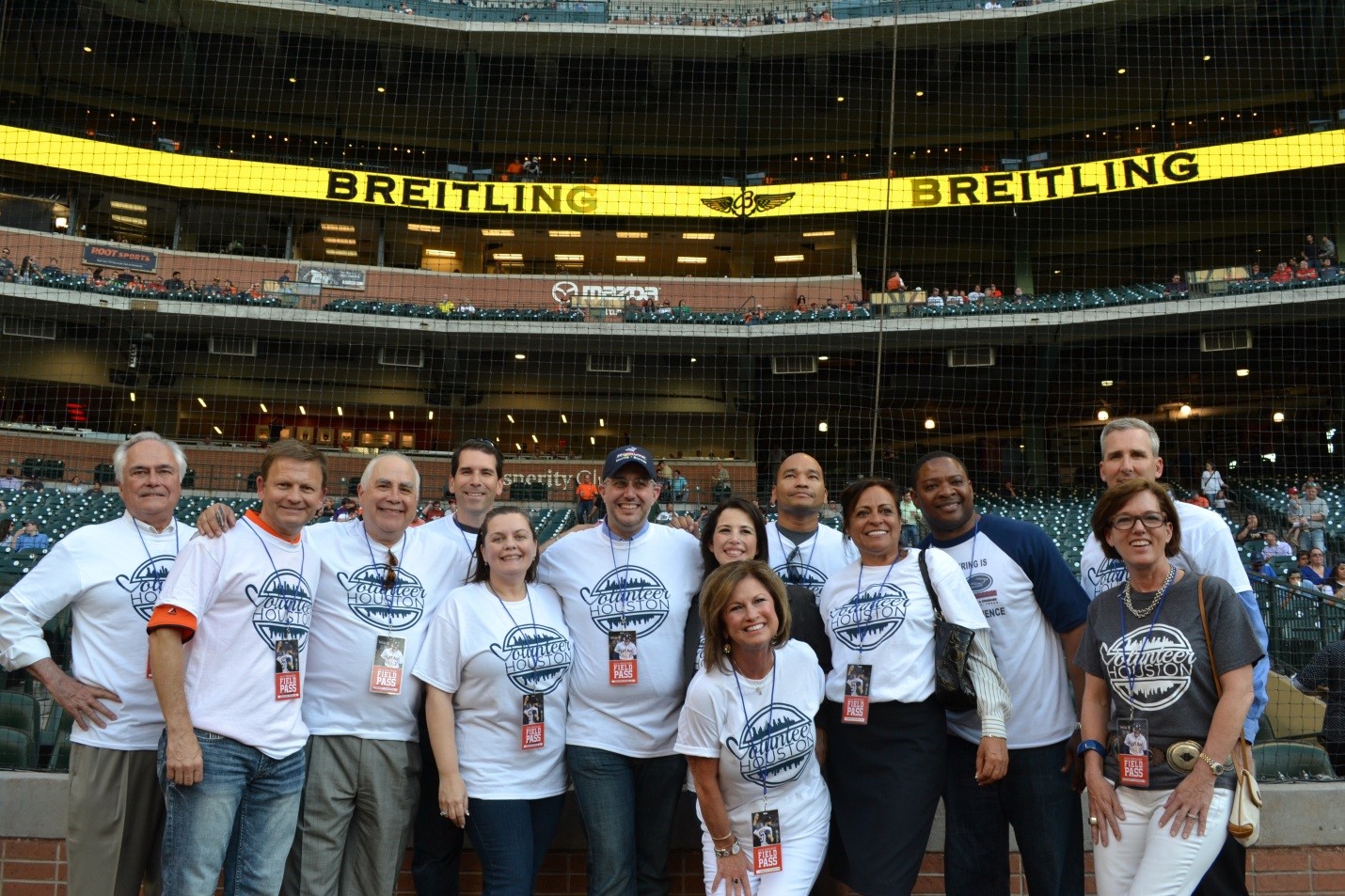 In honor of National Volunteer Week, (April 12-18, 2015) UHD participated in several events and is proud to be a sponsor or active in several city-wide efforts. On Monday, April 13, the Houston Astros recognized the efforts of Volunteer Houston prior to their game against the Oakland Athletics at Minute Maid Park. President Bill Flores and First Lady Dr. Noël Bezette-Flores serve as co-chairs of Volunteer Houston's 31st annual Greater Houston Service Awards, which will be presented Friday, May 15, at 11:30 a.m. in the Bayou City Event Center recognizing the outstanding volunteers in a variety of categories of service.

Volunteer Houston, which connects residents of the Houston area with nonprofits and charities, encourages Houston citizens to track their volunteer hours this year with a goal of logging over one million hours of community service in the Greater Houston Metropolitan Area this year. Drs. Flores and Bezette-Flores also serve on the host committee of the 2015 National Points of Light Conference which will be held in Houston October 19-21.

"Service is at the heart of what we do at UHD, it sets us apart, and we want people to know that," First Lady Dr. Bezette-Flores stated.

Community Engagement has been a cornerstone of Dr. Flores' administration since he arrived at UHD, and it is central to the university's Mission and Vision statements and UHD has gained national attention. In 2012, UHD earned the President's Higher Education Community Service Honor Roll with Distinction, the only public university in Texas to receive such an honor that year. Most recently, UHD received the Carnegie Community Engagement Classification, the only institution in Houston and one of only five institutions in Texas to earn this distinction in 2015.

The campus has also decided to make community engagement the focus of its Quality Enhancement Plan, as part of the SACSCOC re-affirmation process for accreditation. Dr. Flores noted that the QEP will "allow us to thoughtfully integrate opportunities for students to serve their community from the moment they arrive at the University to the time they graduate." Through this participation students will "develop leadership and critical thinking skills, along with an ethos of participation, which is essential to citizenship and democracy."

This week also kicks off organizing efforts for the 2015 City of Houston's Citizenship Month (November), a mayoral initiative and focus of First Lady Kathy Hubbard. Dr. Bezette-Flores has served as co-chair of the initiative and is one of its founders. The campus will host several events to promote community engagement as part of Citizenship Month.

As part of Volunteer Week, UHD hosted the Buffalo Bayou Service Project which brought Harmony Public Charter high school students to participate in science projects and participate in the Ed's Bayou Clean-up as part of the Global Youth Service Day. Faculty from the College of Science and Technology engaged students in hands-on science projects. The Harmony School students later joined Alief Taylor High School students in a showcase of undergraduate research. In all these community engagement and service efforts, UHD stands out as a public university dedicated to serving its community and the Greater Houston Area.

UHD believes it is important to recognize and celebrate community engagement and service learning, and other High-Impact Practices, which occur regularly on campus. President Flores would like to encourage faculty members to be sure to apply for Center for Community Engagement and Service Learning Mini-Grants. The deadline to submit the proposals is May 1, and application can be found online.

Faculty, staff and students who participated in community engagement and service learning during 2014- 2015 are also encouraged to submit nominations to the Center for Community Engagement and Service Learning (CCESL) for the 2015 President's Community Engagement Award. Nominations, as well as a letter of support from your Dean or Supervisor is due to CCESL@uhd.edu by April 26, 2015. Students are encouraged to apply for the 2015 Dr. William V. Flores and Dr. Noel Bezette-Flores Student Award for Community Service Excellence through OrgSync at https://orgsync.com/22975/forms/140427 by April 30.