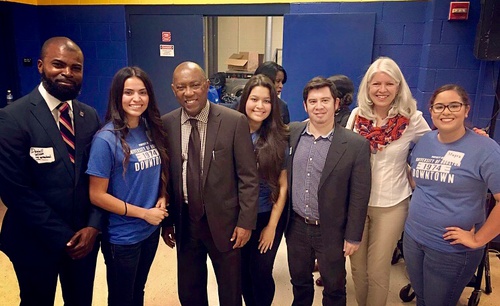 Few universities are as connected with their city's Downtown districts as UHD, but our distinctive position between Buffalo Bayou and White Oak Bayou actually makes UHD a presence in the Near Northside community, as well.

This historic neighborhood has been identified by Houston Mayor Sylvester Turner as one of five pilot neighborhoods, along with Acres Homes, Gulfton, the Second Ward and the Third Ward targeted for neighbor-driven improvements through the City of Houston's Complete Communities initiative.

An area that dates back to the late 1800s, the Houston's Near Northside grew along with the city's railroad industry, exemplified by the massive Hardy Rail Yards, which is located just across from UHD's recently-acquired 17 acre campus expansion. Today's Near Northside is home to many UHD students, locally owned businesses and nonprofits, many of which are led by UHD alumni. With this in mind, UHD has a great opportunity to direct many community engagement and service learning efforts going forward to contributing to this citywide effort at community improvement.

On November 2, a group of UHD students, led by Dr. Rey Romero, associate professor of Spanish Linguistics in the College of Humanities and Social Sciences, offered Spanish-English interpretation services to community members attending Mayor Turner's Complete Communities Near Northside kick-off event held at Marshall Middle School. These students had an opportunity to interact with community members and to demonstrate their commitment to making Houston a better place to live. The students also had the chance to talk and get a quick phot0-op with Mayor Turner and Houston City Council Member Karla Cisneros— a UHD alumna.