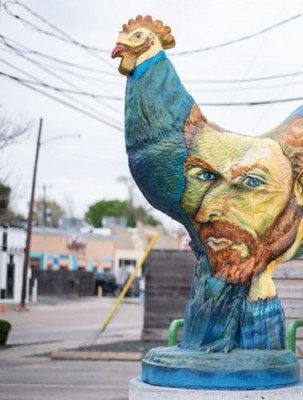 Being an artist requires the courage to be vulnerable and put your work on display for the world to see, judge ... and hopefully enjoy.

It's like the question posed by Vincent Van Gogh: “What would life be if we had no courage to attempt anything?”

University of Houston-Downtown (UHD) art students Brenda Chapa and Bobby Ramos have once again courageously left their marks on the Houston art scene, and this time, in honor of the artist who aksed that profound question.

On display now at the Museum of Fine Arts, Houston (MFAH) is a major Van Gogh survey that brings together more than 50 masterworks by one of the most iconic artists in the history of Western art. Vincent van Gogh: His Life in Art follows Van Gogh (1853–1890) through four key stages of his career, from early sketches to final paintings.

In conjunction with MFAH, Houston restaurant Liberty Kitchen is serving up Van Gogh inspired dishes at all of their locations. The restaurant’s creative and development director, Carl Eaves, commissioned Chapa and Ramos to transform the Heights location’s famous rooster in the style of Van Gogh’s paintings.

Chapa, a KIPP high school graduate, is a senior at UHD studying bilingual education with an art minor. She loves creating art from a very young age and developed a passion for realism, a style used by Van Gogh in his early work.

At the age of five, Chapa and her family moved to the Westbury area of Southwest Houston from Mexico. Chapa’s work is on display in the new Saint Arnold Brewing Company Beer Garden & Restaurant and UHD’s O’Kane Gallery.  For the past three years and counting, she's also participated in the Via Colori Street Painting Festival.

For Chapa, being a part of the burgeoning art community in Houston is an honor.

“Houston is my home,” said Chapa. “It's amazing to have my artwork on display at different places around town because I feel such a connection to this city. My goal is to start doing giant murals and really go big so I leave an impact.”

This spring, Chapa is set to begin her first large-scale mural on a building near the intersection of Bellaire and Airport Blvd.

UHD junior Bobby Ramos grew up in the Houston Heights.

“I’ve been able to be involved with lots of projects in my neighborhood,” said the Waltrip High School graduate. “It not only gives me a sense of accomplishment in how far both myself the area have come, but I have a huge sense of pride for where I come from as well.”

As a youngster, Ramos helped build Donovan Park, but he didn’t stop there. Throughout his student years, he’s helped create multiple large-scale art pieces for the Heights running trail and much more. One of his most notable contributions is  a giant work of art in the shape of a ball of yarn that appeared in Houston’s 2015 Thanksgiving Day parade. In addition to being skilled at working with large "canvases," Van Gogh is one of his favorite artists.

Both artists attribute a lot of their success to time spent in UHD’s Willow Street Pump Station studio honing their craft. The two have shared classes together for over a year and when the opportunity to work with Liberty Kitchen and the MFAH, they immediately thought of one another.

“Brenda is a very skilled painter and her color theory is great which is why I like working with her,” said Ramos. “We learn from each other.”

The pair completed the Liberty Kitchen rooster as a team and look forward to working on other projects together in the future.