Twenty high school juniors and seniors from the Okinawa Prefecture in Japan concluded a three-week cultural and creative writing exchange program this week at the University of Houston-Downtown (UHD).

Selected from 500 applicants, the students traveled to Houston to learn more about the United States and spent their afternoons visiting traditional Texan landmarks, including the Houston Livestock Show & Rodeo, NASA, the Texas Medical Center, the Museum of Natural Science and Hermann Park. During their mornings, the students took classes related to global culture, language and leadership at the University's Applied Business and Technology Center and learned creative writing from representative teachers of Writers in the Schools (WITS), a key partner in the collaboration.

The students each summarized their cultural experiences in an essay, which they read aloud in English on videotape as a souvenir of their global studies.

"This project has been full of surprises for me from the beginning," said Japanese junior Sarah Iraha. "To begin with, my host family spoke mostly Spanish! But it has been a great opportunity for me to gain a deeper knowledge about America, which I had only experienced through watching television. I now am better able to communicate and get along with people of different cultures."

Hiroshi Oshiro, the superintendent of the Okinawa Board of Education, visited Houston six months ago and discussed the possibility of an exchange program with Terry Grier, Ed.D., superintendent of Houston Independent School District. Based on this initial discussion, Kagenobu Nakamoto, a professor of Japanese at the University of Houston central campus, and Tadahiko Kijinzo, of the Okinawa Board of Education, established the program with assistance from UHD and the Japanese government.

"These Japanese students received an excellent overview of the culture, language and educational system of the United States," said G.V. Krishnan, director of the Applied Business and Technology Center at UHD. "As part of their cultural tour of Houston, the students got to interact with their high school peers at Bellaire High School, as well as with English professors from the University. This program helped them gain global leadership skills that will benefit them for the rest of their lives."

In the future, Nakamoto hopes to expand the program to include students in medical, nursing and other scientific fields.

"I am so excited to see how much our inaugural class has learned through the Global Culture, Language & Leadership Program," said Nakamoto. "The trip has given them a real glimpse of American culture, as well as a more global perspective of the world in which they live. I know that this expanded worldview will benefit their future studies and enhance their appreciation of global cultures." 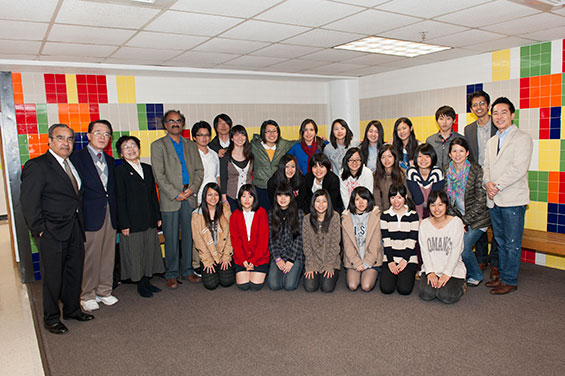