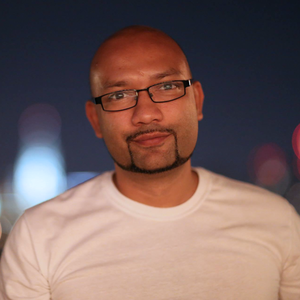 He describes himself as a filmmaker first, "who brings his post-production and cinematography skills to today's news landscape." For UHD alumnus Ali Rizvi ('06), the goal is "always to listen first, but to also gently interrogate the valuable out of the mundane." He credits his alma mater for creating a pathway to earning a second degree to construct and realize his dream career.

The Pulitzer Prize Board obviously agreed.

Video journalist Rizvi received a 2017 Pulitzer Prize for Explanatory Journalism, which was awarded to the International Consortium of Investigative Journalists, McClatchy Washington Bureau and the Miami Herald (a McClatchy newspaper) for the "Panama Papers"—a series of stories using a collaboration of more than 300 reporters on six continents to expose the hidden infrastructure and global scale of offshore tax havens that hid billions for dictators, politicians, and tax cheats. Rizvi and senior motion graphics producer Sohail Al-Jamea, with McClatchy Video Lab, produced a motion graphic video, "The Secret Shell Game," illustrating the complex world of offshore banks and corporations.

When not winning a Pulitzer, the Emmy-nominated video journalist creates short character facing documentaries with McClatchy. The native Houstonian, by way of Pakistan, received a Bachelor of Business Administration degree in marketing at UHD that led him to earning an Master of Science degree in digital cinema from DePaul University in Chicago—all fueling his career beginnings as a social media and communications specialist with tech firms in Seattle to a successful freelance filmmaker and music video producer to a senior video editor with broadcasting giant ESPN to eventually landing at McClatchy in 2015. To view the Pulitzer Prize-winning video, visit www.mcclatchydc.com/news/article69025202.html