UHD Alumnus Devon Still is Still In The Game 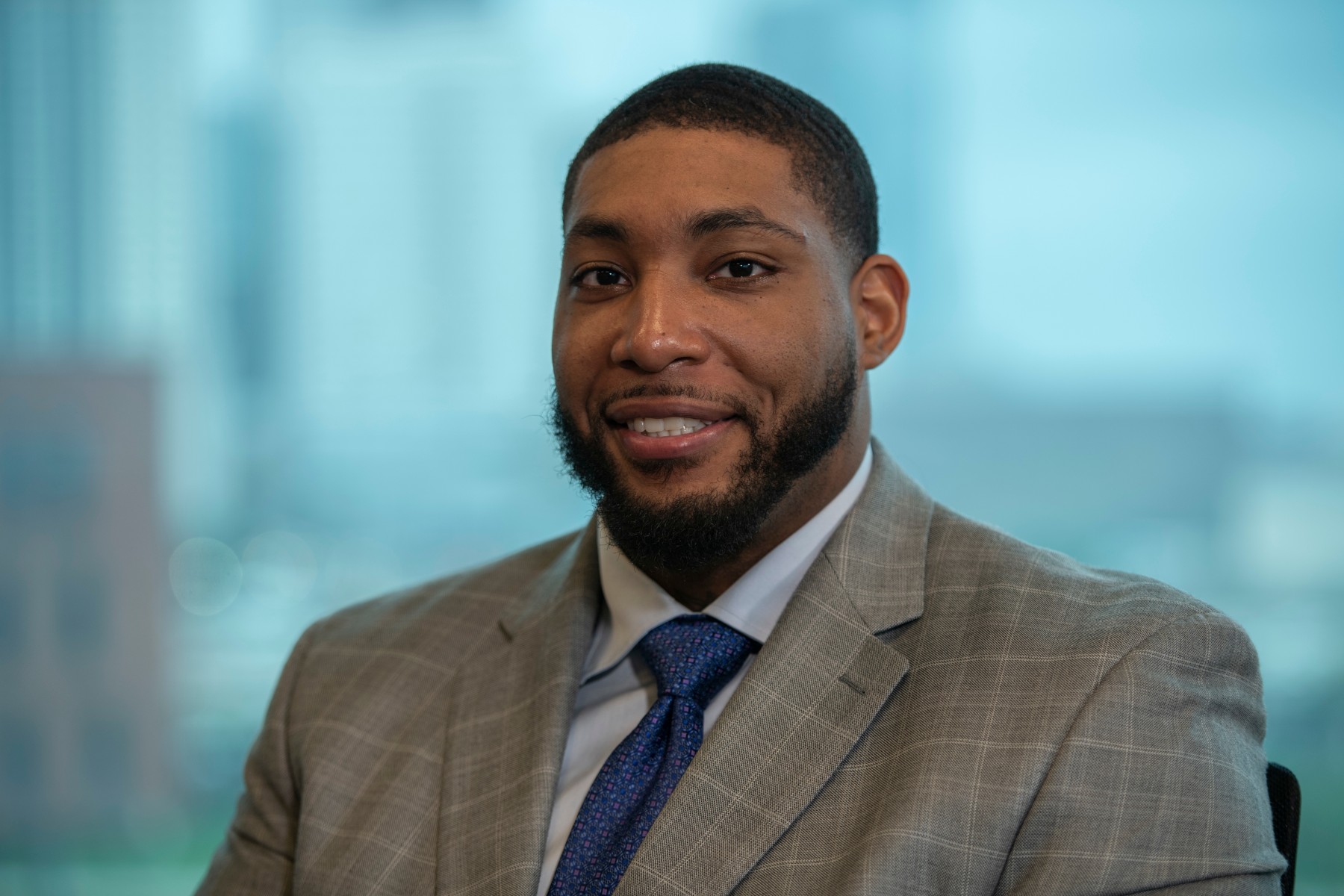 Five surgeries to make it to the NFL, life-threatening injuries and a daughter fighting cancer.

Devon Still’s life has been anything but easy.

The University of Houston-Downtown (UHD) Alumnus (MBA ’19) credits God, family, and faith for his resiliency in tackling life’s playbook.

Still pre-determined his fate early on. He chose to attend Howard High School of Technology in Wilmington, Delaware to study engine technology because he didn’t believe he had what it took to go to college.

“Neither one of my parents graduated from college,” said the first-generation graduate. “People around me weren’t going to college. I thought that I was just going to enter the workforce.”

But, he soon discovered that he was good in football. In fact, he was a standout lineman and team captain during his senior year. He also was recognized as Lineman of the Year by the Delaware Interscholastic Coaches Association and the Gatorade Player of the Year. Still went on to play for Penn State University’s Nittany Lions football team from 2008 to 2011 and served as team captain in 2011.

He attributes his success to the constant and consistent support of his parents.“My parents divorced when I was in third grade,” said the Camden, New Jersey native. “They were always in the stands sitting together, cheering me on…they never missed a game. “That’s what motivated me to get into the NFL.”

While in college, Still discovered he would be a father. However, he never wavered from the challenge of becoming a father thanks again to his upbringing. He credits his dad for setting a great example of what it is to be a man and a father.

“’I’ve heard people say they don’t know how to be a father because they didn’t have one growing up,” he emphasized. “My dad didn’t have a father growing up, but he is the best dad I could ever ask for. It shouldn’t be an excuse. You just have to be the father that you wanted growing up. Because my dad was able to break that cycle, I was able to continue to change the narrative and be there for my daughter.

He graduated from Penn State with a bachelor’s degree in criminal law and justice in 2011.

In the 2012 NFL Draft, Still was selected in the second round (53rd overall) by the Cincinnati Bengals. Two years later, his daughter Leah was diagnosed with Stage 4 neuroblastoma at the age of four and he was released from the Bengals. However, the team re-signed him to continue receiving a salary and health insurance for Leah’s cancer treatment.

“One of the biggest things the Cincinnati Bengals did for me was they allowed me to be a father before a player,” he said.

Still went to the Houston Texans as a defensive end in 2016 followed by the New York Jets in 2017—the same year he announced his retirement from the NFL.

In stories across the Internet you read that Still retired from the NFL because of his daughter’s cancer battle, but that’s not the case.

“I decided to walk away because I realized that remaining in the NFL as a father would have been a selfish act,” said the 30-year-old. “I left the NFL because the injuries started to pile on. Playing sports with my dad at the park as a kid made me fall in love with sports, which I dreamed of playing professionally one day. I knew that if I stayed in the NFL, I would suffer even more physically damage and possible not be able to spend quality time playing with my own children like my dad did with me.”A quote by Oprah continues to impact Still’s perspective on his life before, during and after his NFL years: “If you don’t know who you are before the money and fame, then you’ll never know who you are.”

One he signed with the Houston Texans, he decided to go to grad school. Still chose UHD after hearing a radio commercial.

The first, Still wanted to prove to himself that he was a better student than his undergraduate years. He graduated with a 2.0 GPA from Penn State.

“I would always tell myself that college wasn’t for me and that it was impossible to balance football and school,” he added. “I settled with living a mediocre life. But as time went on, I matured and I wanted to prove that school was for me to earn my master’s degree.”

The second was when he served as team captain during Penn State’s 2011 season. He learned a lot about leadership, guiding his team during one of the biggest scandals in college football history.

“I wanted to understand what leadership looked like in Corporate America,” he emphasized. “I knew if I learned that language along with what I learned in sports, I would be able to combine the two to have a greater impact for my next career.”

His two daughters (he and his wife welcomed a second daughter in 2019) were at UHD’s fall 2019 commencement to see their dad walk across the stage.

And by the way, Still graduated from UHD with a 3.4 GPA.

Taking everything he’s learned thus far, Still is now creating a new legacy for himself and his family by sharing his journey of resilience to a greater audience.

It began with his ESPY speech in 2015. Still and his daughter, Leah, received the Jimmy V Award for their determination and perseverance in the face of cancer. This was Still’s first time speaking before an audience and he was hooked.

As a motivational speaker, Still has spoken around the country to some of the top corporate names including Dick’s Sporting Goods, Virgin Group, Proctor & Gamble, Walmart and FBI (Houston).

For Still, earning his UHD degree has made “a huge impact when I speak in front of audiences about leadership and building a championship culture and mindset. Being able to use the knowledge I gained from UHD has allowed me to connect with audiences on a deeper level.

“The feeling I get standing on stage speaking life into people means I’m still in the game. But, it’s a much bigger game because I’m helping people overcome challenges in their life. It’s the same feeling that I felt playing football,” he said.

Also in 2015 Still and Leah created the Still Strong Foundation that is dedicated to giving grants to families affected by childhood cancers. Since its inception, the Foundation has raised more than $2 million.

“I had to choose to make the decision to leave my daughter to go back to football so I could pay for her treatments,” Still said. “That was one of the worst feelings I ever had. I didn’t want other families to have to make that decision because I know what is does to you mentally.”

This year, Leah is celebrating five years of being cancer-free.

In addition to the Foundation, Still has an online university, Playmaker University to help individuals in the game of life by reaching their highest potential on three levels: mentally, physically and spiritually.

“A playmaker in sports is anyone who has the ability to change the game at any given moment,” he noted.

If that didn’t keep him busy enough, Still and his wife have the podcast, “Realationships,” which is 33rd in the world for podcasts on relationships, the bi-weekly show on Fox, “Talking Life’s Trials” and a possible Netflix series. In 2019, he released his first book, “Still in the Game: Finding Faith to Tackle Life’s Biggest Challenges.” 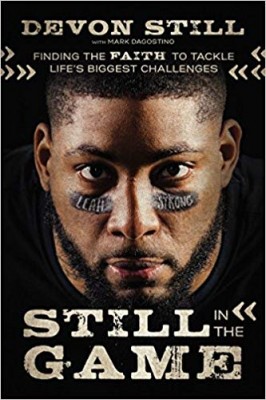 Final thoughts for someone considering college or returning back to school?

“We all have this ideal of how our life is supposed to go and what accomplishments we should reach by a particular age. However, life doesn’t work that way,” Still said. “Along your journey you will be faced with obstacles, some big some small, that will try and derail you. There will be times you’re frustrated because it seems like you’re stuck while everyone else is living their dreams. But, you must focus on your dreams and your path. Being a first-generation college student or returning to college after a long hiatus can be scary. Understand that if your dreams or goals don’t scare you, then they aren’t big enough. It’s time to stop watching life from the sidelines and get in the game! As long as you’re alive, your life still has purpose.”

>
About the University of Houston-Downtown

UHD Alumnus Devon Still is Still In The Game