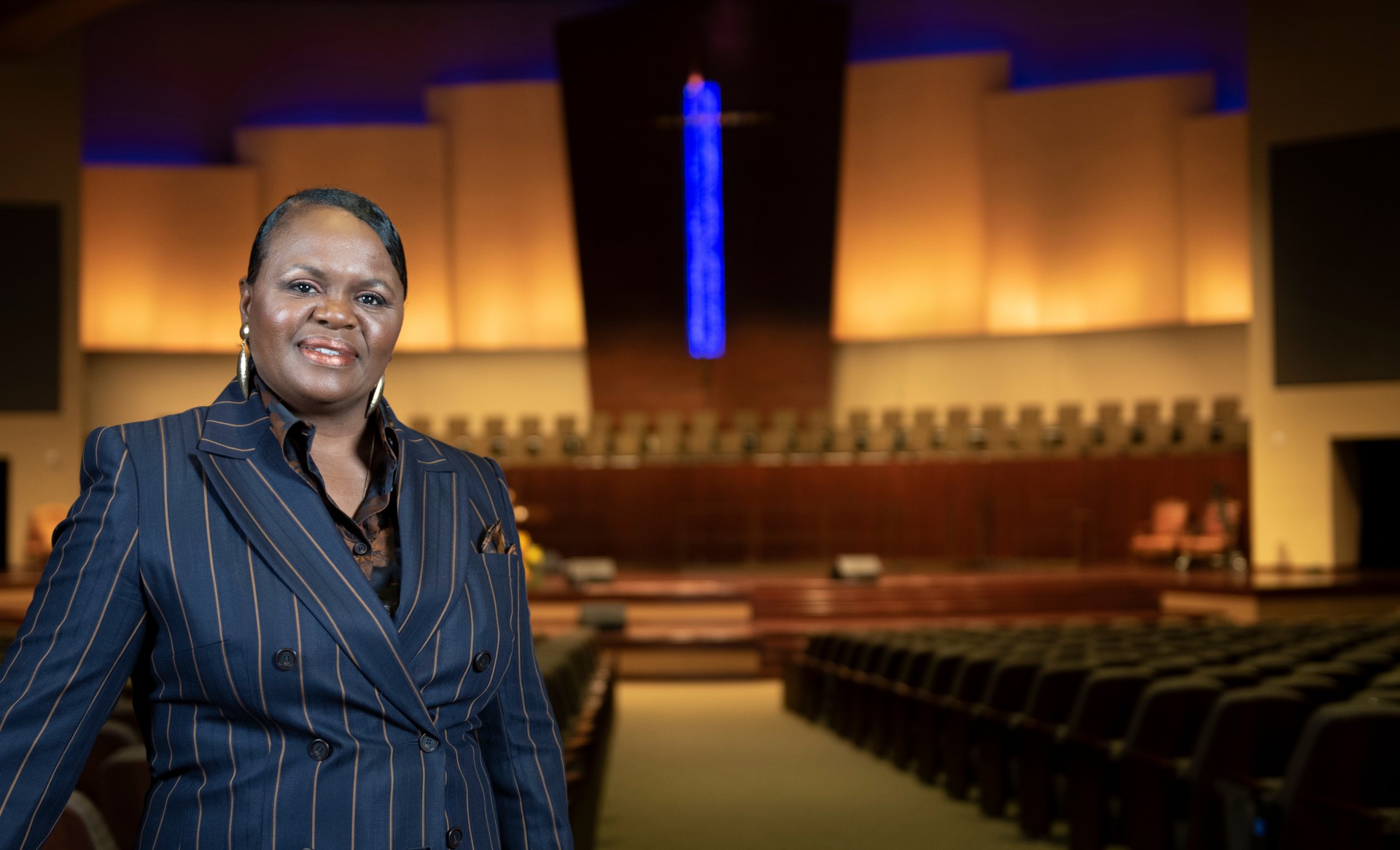 She grew up in Settegast, a Northeast Houston community, where the self-described “grandmother’s child” was immersed in ministry at Little Union Missionary Baptist Church. Both of West’s grandparents were very active in their home church.

“I believe that it was the Lord’s doing. I was able to grow up in church and experience early on the aspects of ministry life,” said West. “I grew up in church. That was my life and I loved it.”

West attended Houston’s Forest Brook High School where she credits her “wonderful” counselors and teachers for being instrumental in pointing her in the right direction when it came to college. In fact, she’s still in contact with a few of them to this day.

“My parents were hardworking. But, college preparation wasn’t talked about in my home,” noted West, who is one of five children.

West’s father worked as a butcher for Blue Ribbon Packing Company—at the time across from the University of Houston (UH) on Cullen Boulevard. Her mother retired from Houston Independent School District.

After high school graduation, West took a few classes at UH followed by a job in the oil and gas industry. She and a fellow co-worker decided to attend night classes at UHD.

West married in 1982, followed by her first son (Ralph II). Five years later she was laid off and pregnant with her second son (Ralpheal). With her hands full thanks to a new husband (Dr. Ralph Douglas West) and two young children, she decided to take a momentary break from school.

And by the way, West and her husband also were starting a new church with 32 members at their home on Joy Street. Little did she know that her early upbringing in the church would be instrumental in her life’s work for now more than three decades.

“UHD was such a friendly school for adults with families,” West emphasized. “The classes were so accommodating for a working professional or mom who’s trying to get it done. I just chiseled away a little at a time in finishing my degree. I had young children and a new church that demanded my time.”

Both of West’s sons went on to earn their master’s in theology.

“Not attending college was not an option for my sons,” West said.

Family, UHD and a growing church kept her busy…really busy.“I’m thankful for UHD…when I needed the classes they were available…it was one of the joys of my journey at UHD. I didn’t have to wait,” she said.

During her time at UHD, West and her husband continued growing their Bingle church campus; and within the next 10 years, The Church Without Walls opened its second of three campuses in 1997.

Today, The Church Without Walls, one church in three locations, encompasses approximately 150,000 square feet of space, 40 acres of land and embraces 20,000 members, 16,443 families. In addition to reaching national audiences through weekly television broadcast and internet streaming, actively supporting work on multiple mission fields both at home and abroad. The Church averages 9,000 in weekly attendance.

As the Church’s ministry leader, West purveys over 30-plus ministries, which includes the Mosaic Women’s Ministry, The Diamonds In The Rough, a mentoring program for teen girls and the Ralph Douglas West Ministries. She’s also executive producer of the “Encouragement Today” broadcast and editor of “The Brook” and “Mosaic” magazines for church.

She and her husband are committed to supporting education and ministry preparation. Their philanthropic support extends internationally through West Africa Theological Seminary, Project Abroad, Convoy of Hope - Haiti Project as well as local universities, seminaries, organizations and associations.

West is the recipient of awards, including Inspire Woman of Influence, Top 25 Women of Houston, One of Houston’s Leading First Ladies, Legacy Award, Congressional Recognition and other honors for her community and ministry involvement.

After 15 years, West completed her degree in 1998 with a B.B.A. in Computer Information Systems.

“It was the desire of my heart to get my degree,” she said. “And, my husband is the ultimate encourager. He told me that ‘no one is going to ask you how long it took you to finish, the main thing is that you finished.’”

West felt that it was important that she walked commencement.“I wanted my children to see me achieve such a great accomplishment,” said the first-generation graduate. “It has also motivated other family members to complete higher education. I’m grateful for that. Just do it and finish.”