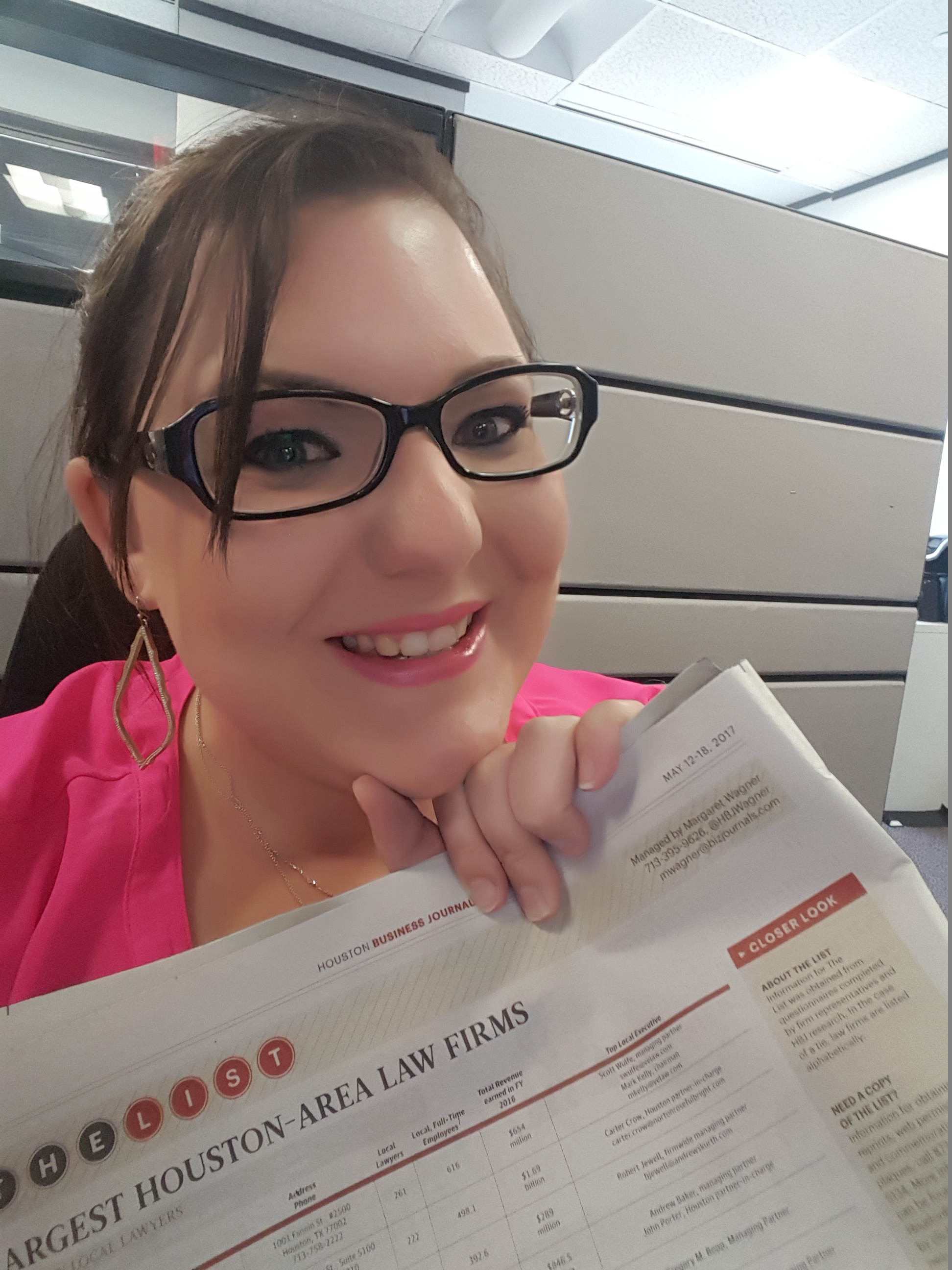 Margaret Wagner's first job, in high school, focused on a list. That is, 31 flavors of ice cream at Baskin-Robbins.

"My mother told me I needed to get a job," Wagner said. "So, I pulled out the Southwestern Bell phone book and went down the alphabet calling businesses that would hire an almost 15-year-old. I Iater learned that my mother was kidding, but I worked there through high school and lost 20 pounds after I quit."

Ironically, more than a decade later, this UHD alumna would work to oversee "The Lists" at the Houston Business Journal (HBJ), which include Houston's Largest Law Firms; Heavy Hitters in Commercial Real Estate; Largest Uptown Employers; and Top Public Companies in Houston, just to name a few.

Growing up, Wagner told family and friends that she wanted to be a lawyer, but she knew deep down that her heart's desire was to be a writer. Between Baskin-Robbins and now HBJ, she graduated from the University of Houston-Downtown (UHD) in 2013 with a Bachelor of Science degree in Professional Writing, which is the reason she chose to attend UHD. According to Wagner, her favorite classes were technical writing, web publishing and history of Houston. She attributes the tenacious spirit of her professors to "always push to do better and never sugar coat."

"UHD offered a professional writing program, which combines many forms of writing," said the 2013 graduate. "It's a very versatile degree. And, I knew it was a smart decision."

As the newly named HBJ Data Reporter, Wagner is responsible for the Journal's Top 25 Lists, as well as the annual Book of the Lists, and the new expanded weekly section of The Lists. Before joining HBJ, she previously worked as a marketing and event coordinator at Meritage Homes in Houston.

"Words cannot describe how proud I am to work at the Journal," she said. "It has an amazing reputation. Honestly, I hope to work here until I retire."

So, what's her secret for success?

"Perserverence," said Wagner. "I never let anyone tell me no or hold me back. There will always be those days or times when you want to sit on the floor and cry. Then I tell myself, 'there's no crying in baseball' (from the movie, A League of Their Own). Then I pick myself up, dust myself off, and keep going. And, I remind myself to do what makes me happy."