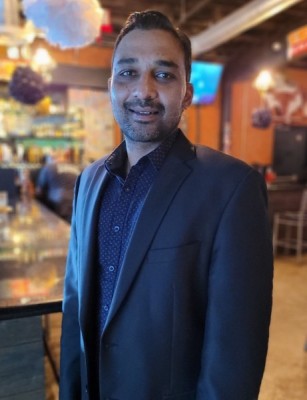 Located just a stone’s throw from Houston’s BBVA Stadium, the five-year-old King’s Court is essentially a second home for fans of Houston soccer clubs the Dynamo and the Dash. Beyond these teams, however, aficionados of international teams, such as Manchester United, Real Madrid and Chelsea F.C. flock to the bar and restaurant to catch televised games.

Patel, who earned his bachelor’s degree in Computer Information Systems in 2006 from UHD’s Marilyn Davies College of Business, is no stranger to making people feel comfortable. He’s naturally done that throughout his career. As the son of Houston-area hoteliers, Patel has spent much of his life in the hospitality industry and dreamt of applying his skills to owning a bar and restaurant.

“My parents taught me that service is the top priority in any business,” he said. “It’s important to make your customers want to come back and continue to support you … to keep them talking about you and telling people about their experience at your business. Word of mouth is the best marketing.”

Patel’s parents also passed along a sense of community service. Just as he enjoys making his customers happy, he draws much satisfaction from helping those in need. His most visible efforts in supporting his fellow Houstonians have been through partnerships with friend and FOX26 anchor Isiah Carey (host of “The Isiah Factor Uncensored”). Together, they have led toy drives during the holiday season to benefit children who may otherwise not receive presents, and also supported first-responders, as well as those who have lost their jobs during COVID-19.

This week, they team up for the H-Town Artist Showcase, which will spotlight rising musical stars from 4 to 8 p.m., Sunday, June 20 at King’s Court. Tickets are $10.

Among those performing is UHD’s very-own blues band Admission Possible. Proceeds from ticket sales benefit the Carey and Patel’s Dollie Rose Foundation (named for their respective mothers), which supports community members in need. Previous initiatives undertaken by the Foundation include the aforementioned toy drives and providing food for the homeless and air conditioners for seniors.

“I learned from my parents to give back with your heart and not to expect anything in return,” Patel said. “I’m proud that King’s Court not only makes so many of its customers happy, but it also serves as a place where we can do good things for others.”

Another thing Patel learned from his parents is the importance of family. And King’s Court is indeed a family affair. His wife and chef Meghna is a partner in this venture and also developed its menu (a fusion of British, American and Indian food).

While some of life’s greatest lessons were learned working alongside mom and dad … and now wife Meghna … Patel gives kudos to UHD for fine tuning the talents he developed growing up in the hotel industry.

“I really liked UHD,” he said. “The student-to-teacher ratio was very helpful. Smaller classes were very helpful in grasping the course lessons, and I had great advisers and counselors. I’m grateful to the University for its support and proud to call myself an alumnus.”