UHD Alum Celebrates 'Back to the Future' Films in New Book 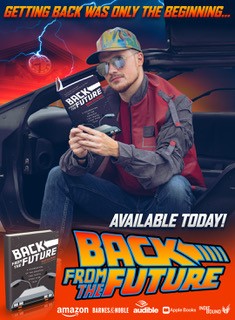 “Back to the Future” was a massive box office hit when it was released in 1985 and spawned two equally popular sequels. Among its superfans, who know the series inside and out is UHD alumnus Brad Gilmore.

Gilmore, who earned a bachelor’s degree in Communication Studies in 2019, is so passionate about the “Back to the Future” franchise, he recently authored the book “Back From the Future: A Celebration of the Greatest Time Travel Story Ever Told.”

Gilmore wasn’t even born when the first film was released but stumbled upon the trilogy when he was just 7 years old. He recalls coming home from school on a Friday and discovering a marathon of the movies on the Disney Channel.

“These were movies that clicked with me,” he said. “My parents were born in the 1950s, an era that is heavily featured in the first movie, and my siblings were around in the 1980s, another time period that is in the film. I felt these familial ties. And to see a car that can travel through time was very cool.”

Gilmore’s interest in these films first spawned “Back to the Future: The Podcast” in 2015. The podcast is still in production, and has provided Gilmore the opportunity to interview stars from the film series including Lea Thompson and Crispin Glover among others.

Inspired by a friend who wrote a book about the “Star Wars” franchise, Gilmore approached Mango Media Inc. with the idea for a “Back to the Future” text. The rest is history for the Gator turned author.

“Back From the Future” was published in April. It’s available in hardback, audiobook and Kindle formats. The book currently holds an impressive 3.63 rating on Goodreads.com with readers applauding Gilmore’s apparent passion for the franchise and his knowledge of the films.

Although this is Gilmore’s first book, he’s no stranger to communications. While attending UHD, he balanced a broadcasting career as an announcer for Houston’s Reality of Wrestling. He also continues to hold that position and serves as an announcer for ESPN Radio 97.5 FM (co-hosting a show and podcast with wrestling legend Booker T). In fact, Gilmore will be working this weekend as the Reality of Wrestling hosts its first-ever Drive-In Wrestling event AT 7 p.m., Aug. 8 in the parking lot of the Booker T. World Gym Arena in Texas City (10000 Emmett F. Lowry #1152).

In spite of the pandemic, Gilmore continues to stay busy. COVID-19 has spurred his creativity as a communicator. Presently, he continues to call Reality of Wrestling matches via Zoom and produce his live radio show with Booker T from home.

“Everyone has had to make changes in their careers, the way they work and how they live,” he said. “My career has been no different. I’ve had to learn new things and continue to be productive.”

Gilmore advises aspiring authors to “have an idea and be passionate about it.” Despite his love and knowledge of the movies, writing the book was an arduous process. Still, his passion for the subject was essential in making this particular dream a reality for the author … and for other fans of the film series.

“I love ‘Back to the Future.’ It never gets old to me,” he said “But, I’d tell anyone writing a book to not only be passionate … be true to yourself. I wrote this book as if I was telling you about the films. I wanted my voice to be in this book, and I think it is. I think this authenticity not only helped me as a writer, but it’s helpful to readers, so they understand that I absolutely know and love these films.”

UHD Alum Celebrates 'Back to the Future' Films in New Book