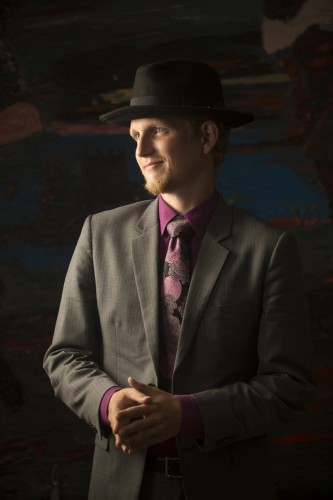 When thinking of the traditional college student, what usually comes to mind is the freshly minted high school graduate walking the halls of their soon-to-be alma mater. If you take a look at UHD’s student population, you may be surprised to learn that 68 percent of its student body start out as transfer students. Why? The University understands that as the second largest four-year institution in Houston, it needed to create seamless pathways for more students from all walks of life to earn a UHD degree for this burgeoning population that continues to grow. How? UHD, along with Houston Community College (HCC) and Lone Star College (LSC) leadership, expanded its partnerships by adding strategic admission models, degree maps and advising teams at their campuses to help students avoid taking unexpected detours from their academic pursuits. In fall 2017, more than 1,800 students transferred to UHD.

Meet John Jordan, one of two stellar transfer students who are making the grade.

He’s a self-described marketer and an out-of-the-box thinker.

In fact, his love and passion for internet marketing—at one time he was responsible for 700 websites—got in the way of attending Houston’s Bellaire High School. So, he left after one year.

For John Jordan being diagnosed with a rare condition changed the course of his life forever.

In late 2007, he was diagnosed with dysautonomia—a disorder of the autonomic nervous system. Even though his illness delayed him for a year from getting a high school diploma, he eventually earned it in 2009 via home-schooling. In the summer of that same year, he enrolled at HCC, where he earned two degrees—an Associate of Applied Science in paralegal technology and an Associate of Arts.

“My illness imposed a sense of urgency and changed my motivation in what I wanted to do moving forward in my life,” said the native Houstonian.

While experiencing another relapse, Jordan began reading everything from history to philosophy to law. Through it all, he discovered the complex world of law. Fueled by this newfound passion, he pursued a Bachelor of Applied Arts and Sciences-Applied Administration within UHD’s University College. After graduation, he plans on attending law school followed by working in a private practice that specializes in constitutional and criminal law.

“I feel good when I’m helping people,” said the 27-year old. “So many people need a good attorney, and they don’t have access to one. There are so many cases at this moment with laws that can be challenged but haven’t been.”

The love of law runs in the family. Jordan’s mother has an associate’s degree in paralegal technology, like her son, with aspirations to become a family law attorney.

Since entering UHD in spring 2016, it’s been “all gas and no brakes” for Jordan. In fact, in his first year at UHD, he received the University’s Academic Award as “Outstanding Senior.” Bestowed by faculty members from each of UHD’s five colleges, the award recognizes students who have achieved distinction through their stellar academic performance.

Thanks to the transfer pathways established by HCC and UHD, Jordan was able to transfer all of his previously earned college credits without repeating any courses—only 42 hours was needed for him to earn a bachelor’s degree from UHD in December 2017.

“It wasn’t all me,” Jordan said. “So many people were involved in my success…the advisors, coordinators, professors and staff were above reproach…exceptional. There are so many memorable experiences that will stay with me.”

Jordan’s advice for anyone considering a second-act in their academic pursuits:

“If you don’t like your present situation… do something about it,” he said. “The more you second-guess yourself…you won’t do it. There’s no right or wrong way to do it.”

Jordan’s successful transition from HCC to UHD is an example of both institutions’ commitment to the Houston Guided Pathways to Success (Houston GPS) initiative. This multi-institutional partnership fosters collaboration among area colleges and universities with the goal of helping students graduate on time and with less debt. Additionally, Houston GPS is focused on streamlining the transfer process between local community colleges and universities.

Those seeking to continue their studies at UHD benefit from resources and events, like Transfer Thursday, which offers admission counseling, information on scholarship opportunities, and advising.