To Art With Love

The husband and wife duo are self-described community art advocates. Elia and Noah Quiles (pronounced ‘key-less’) have dedicated their lives to creating civic pride through civic art with UP Art Studio.

After her father took ill, Elia returned to Houston and began attending the University of Houston-Downtown (UHD) part time. The UHD alumna met Noah in 2002 when she was a junior. When they met, Noah asked Elia if she was smart. She replied, “I’m on the Dean’s List.”

They married in 2003. And, a year later she graduated (with honors) with a degree in computer information systems from the Marilyn Davies College of Business. With her newly minted degree, she accepted a one-week temporary assignment with a commercial real estate company. The assignment turned into a 12-year career with a vice president title.

“I always tell students that it doesn’t matter what degree you get … just get your degree,” said Elia. “You never know what can be applied in a field that you never imagined being in.”

She decided to leave commercial real estate and make UP Art Studio a full-time endeavor.

And Now, Noah … The Visionary

Unlike Elia, Noah grew up in a rough neighborhood on the south side of Chicago in the 90s where he used graffiti as an outlet … his way of staying unnoticed by the gangs. When he turned 18, his family moved to Houston.

“I was accidentally born, raised and educated on the south side of Chicago,” he said jokingly. “My vision of the world through art and the way I am is because of my upbringing in an economically challenged community. We were poor, but we were rich in culture.”

He also has always had an appreciation for the art world thanks to his Chicago roots, which continue to fuel his drive today.

“My mission and my passion for what I do is like no other,” Noah said “I eat, sleep and dream it.”

After meeting and marrying Elia, and becoming a father of two (Rex and Isabella), Noah worked as a commercial photographer.

But, the industry and his passion soon waned.

“One day, he told me that he wanted to get back to his roots by helping fellow graffiti artists,” said Elia.

The first UP Art Studio opened its doors as a gallery for artists in 2012 and hosted its first show later that same year. Through this effort, Elia and Noah became immersed in Houston’s art community. Within the first 18 months, they were hosting new shows, new artists, new murals and bigger crowds. 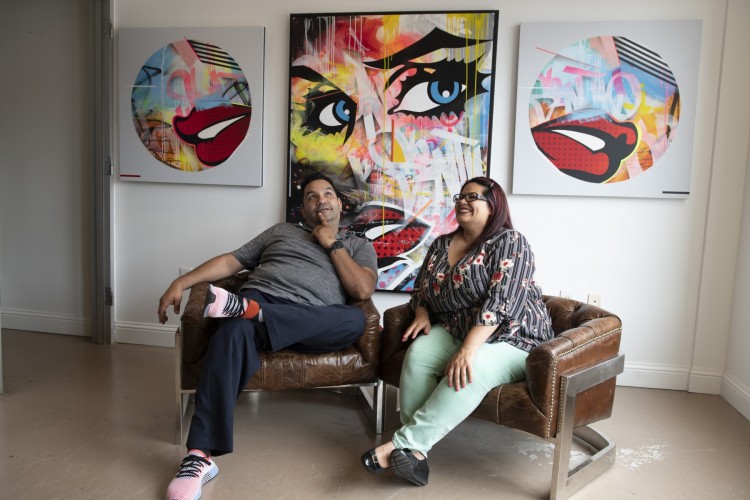 UP Art Studio was now coming into its own—specializing in public art projects, mural and art commissions, design services, project management, event planning and artist collaborations by bringing together some of the city’s most talented creatives, including artists from around the globe.

A year and half later, they connected with French artist Sebastien “Mr. D” Boileau to fundraise and manage a mural project. In 2014, the award-winning “Preservons la Creation,” which at the time was the biggest mural in Houston’s history at 9,750 square feet and five stories tall premiered. The project introduced the Quiles to fiscal sponsorship, which involves teaming with nonprofits that serve as fiscal agents that accept tax-deductible donations on behalf of UP Art Studio and the project.

In 2015, UP Art Studio initiated the award-winning Mini Murals Houston project that reimagines traffic signal control cabinets (also referred to as electrical or utility boxes) and converts them into works of art by local and visiting artists. Greater Houston residents can visit minimurals.org/houston to discover locations in their neighborhoods that may feature a mini mural. These mini murals are intended to help instill civic pride while beautifying neighborhoods and enhancing the urban landscape.

Later that same year, the Quiles presented the TEDHouston Talk, “Why is art crucial to developing civic pride?” in which they shared their thoughts on street art, how it seeds culture and the need to also support the emerging street artists.

“I wanted to do more … to provide art in the communities,” said Elia. “The mini murals project, which was being done for the last 15 years around the country and the world, was the answer.”

So, Noah and Elia approached the city’s public works department with the Mini Murals project. And, to their surprise they loved the idea. With no funding from the city, they raised the funding to make it a reality. Thanks to support from the City of Houston Public Works, Mayor’s Office of Cultural Affairs, Fresh Arts, East End Foundation and the late Councilman Larry Green, the project’s pilot phase of 31 mini murals has now grown to more than 220 throughout Greater Houston. Now in its third year, UP Art is extending the project to Pasadena, La Porte and the state capitol, Austin.

Careful thought and research is given to each and every mural created in this city.

According to Noah, “We ensure a project is the best for a particular community by canvasing it. We don’t go into the community and say, “This is what you get.”

There’s proof in their mission and vision. At the intersection of North Main and Commerce stands a mini Gator mural representing the pride of UHD. The work, commissioned in collaboration with UHD’s Office of University Relations and UP Art Studio, was created by local artist Anat Ronen who is responsible for numerous murals across the city.

“There are very few people who do what we do in this region, state and country,” he said. “I like to think that we support artists, like Anat, who have unique and amazing stories. In this life, my purpose is to curate and create art.”

They have also worked on large-scale mural projects in the U.S., including commercial art for Pepsi and Mountain Dew, and in Miami’s Wynwood Art District during Miami Art Basel, where they have an ongoing relationship with the former mayor of Miami Beach.

“I get the most joy out of what we do by putting art into communities that are underserved where it’s accessible to anyone,” said Elia. “We are art advocates. We aim to give artists opportunities that they otherwise wouldn’t have. That’s what drives us.”

To Art With Love