The Sky’s The Limit for UHD Alumna Esperanza Martinez 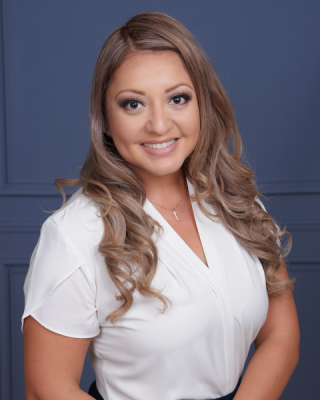 In fact, she credits her alma mater for having a positive influence on her life’s trajectory. Even though it’s been a few years since she’s graduated, Martinez still exudes excitement and pride when telling her story about UHD.

So, let’s start at the beginning. She grew up in Alief and graduated from Alief Hastings High School where she was a member of the dance drill team (known as the Golden Brigade) — an asset when she attended UHD ... we will come back to that later.

Post high school, Martinez attended Houston Community College to earn an associate’s degree in the paralegal program and then transferred her credits to UHD. As a 27-year-old undergraduate, she was extremely active — from Student Government Association volunteer to Cheerleading Club to the Pre-Law Association to working in the Office of Scholarship & Financial Aid.

“I miss being on campus!” said the 34-year-old. “Not only did I make life-long friends being an active student, but what I love about UHD is that it’s the best for working professionals ... best location ... best school for evening classes ... best professors and affordable. I was at home at UHD.”

Martinez also expressed that she valued memorable experiences that were valuable to her major in Criminal Justice.

The first was during her senior year. “Dr. Threadcraft-Walker (UHD Assistant Professor of Criminal Justice and alumni) sent me to Thurgood Marshall Law School to complete service learning hours,” she noted. “I spent 10 hours a week working with The Innocence Project, where I would review mail correspondence and applications for case review from inmates who were wrongfully convicted.”

The second was moving to Austin to participate in the Texas Legislative Internship Program in 2017.

“I had the opportunity to work as a Legislative Aide for House Representative Alma Allen (Dist. 131) on the Corrections Committee. I attended committee hearings and analyzed pending legislation on bail reform, prisons, agency spending and personnel. It was eye-opening ... it was real, not pretend work ... real experience. I was inspired to one day run for office like State Representative and UHD Alumna Mary Ann Perez.”

Thanks to being able to transfer credits to UHD, Martinez graduated in two years. She earned a bachelor’s degree in Criminal Justice in 2017 with plans to attend law school. Presently, she works as a paralegal for Munsch Hardt Kopf & Harr, P.C. law firm.

But before law school, she has made a bold commitment ... she enlisted with the U.S. Army.

“I signed a six-year contract and my UHD degree has allowed me to skip the first ranks of enlisted soldiers to begin my Army career as a Specialist (rank E4),” Martinez said. “My favorite benefits of joining the Army is the $30,000 student loan repayment and $7,000 sign-on bonus. Aside from the cool military uniform, I get job training in Human Resources (my chosen Military Occupation Specialty or “MOS”). The Army can also pay for my law school tuition!”

By the way, she plans to keep her next degree pursuit in the UH System Family by attending University of Houston Law Center. So, what’s next? After law school, Martinez’s career path is Air Force Judge Advocate General’s Corps also known as JAG.

Her advice to prospective students?

“I wasn’t a traditional 17- or 18-year-old going to college,” she said. “I would tell anyone to go all in. Take advantage of what UHD has to offer because it connects you more to the university in ways that I didn’t even expect. Don’t just go to class and go home. Become part of the University to discover your passions. My perception changed from I’m taking classes at UHD to I am UHD ... it was life-changing.”

The Sky’s The Limit for UHD Alumna Esperanza Martinez