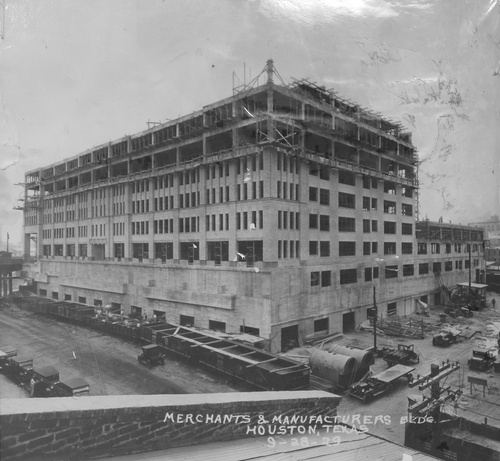 On the heels of the Texas Revolution (Oct. 2, 1835 - April 21, 1836), two New York City real estate developers and brothers, John Kirby Allen and Augustus Chapman Allen, were seeking a location where they could begin building "a great center of government and commerce."

In August 1836, the brothers purchased 6,642 acres of land for $9,428 and landed in Texas, where the confluence of White Oak Bayou and Buffalo Bayou served as a natural turning basin—now known as Allen's Landing. The "city to be" was named after Sam Houston—the hero of San Jacinto—whom the Allen brothers admired and anticipated to be the first President of the Republic of Texas.

It's obvious that the city of Houston didn't begin as a metropolis; however between 1836 and 1861—when the Civil War began—the city's population soared from 12 residents to more than 3,000 and developed itself as the inland port for shipping cotton and other goods to the Gulf of Mexico.

Cotton warehouses—one on the site of the present-day's One MainAcademic Building—owned by one of the Allen brothers stood for several years. The old dock pilings, still visible from the Main Street Viaduct when looking upstream, were conceivably constructed for Civil War-era warehouses. For a time in 1863, after the Battle of Galveston Bay, the warehouse became a detention facility for captured Union soldiers before they were sent to a permanent POW camp (possibly Camp Ford in Tyler, Texas). Urban legends circulated over the decades among the student population about how this location was a "prison camp," which stemmed from stories of the Union POWs and also from the existence of a "secret tunnel." In the 1920s, after the original warehouses were torn down, an 11-story warehouse, office and retail complex—the Merchants and Manufacturers Building (M&M) was built, which is now UHD's One Main Building.

The builders assumed that freight would still be moved via water, as well as by rail and truck. So, they built a tunnel that led from Buffalo Bayou to the building's lowest sub-basement, where a freight elevator waited to take any cargo up to the floors in the M&M Building. From there, freight could be loaded onto trucks through the Girard Street entrances, or onto trains via the Missouri Kansas Texas or Union Pacific rail lines that both met at the building. The tunnel remained in use until South Texas Junior College took over the building in 1969. The entrance was sealed and forgotten, except for facilities management personnel occasionally accessing the spiral staircase for routine building maintenance.

Today, as the city of Houston and the Buffalo Bayou Partnership expands the hike and bike trails along the White Oak and Buffalo Bayous; the door to the secret tunnel is being re-discovered and is a significant reminder of One Main Building's historic ties to industry and commerce between the waterways.

(This article, co-authored with former UHD archivist, Melissa Torres, is taken from the lastest edition of UHD Magazine.)