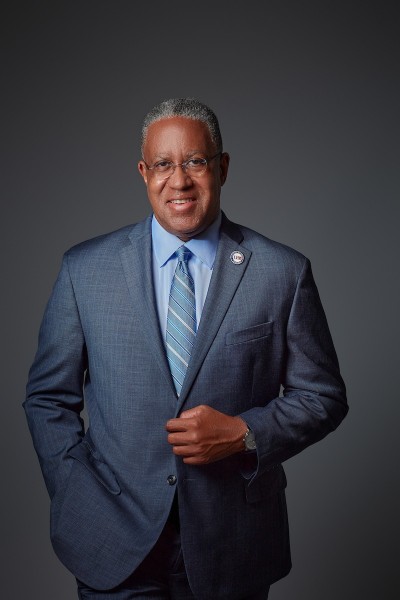 The Investiture of President Loren J. Blanchard will commence on Tuesday, May 24, with a formal morning ceremony and celebrations throughout the day and evening.

In academia, an Investiture is a formal ceremony of conferring the authority and symbols of the office upon a university president. Traditionally, such ceremonies are held at the conclusion of the president’s first year in office.

Blanchard joined UHD as its seventh president on March 15, 2021. Over the past year, he has established UHD’s Institutional Compass, which charts a course for new levels of success, including strengthening justice, student success and equity, supporting institutional excellence and infrastructure, and growing as an anchor institution.

The day’s events for the Investiture Program include the following events:

UHD will also honor outstanding graduates who have made a remarkable impact and those supporters of the University who feel a special call to move UHD forward. The following UHD Alumni and Friends will be recognized at this event:

Distinguished Alumna
The Honorable Paula Mendoza (BS ’95; MBA ’17)
Paula Mendoza is an entrepreneur, innovator, advocate, barrier-breaker, and tireless volunteer. She is also the first UHD graduate and first Latina to serve on the UH System Board of Regents.

Alumni Service Award
Phillip Ellison (BA ’94)
Phillip Ellison has been a driving force in the incubation and founding of the UHD Alumni Association shortly after completing his degree in the mid-90s. An accomplished supply chain executive with 25 years of experience in purchasing and contract management in both the private and public sectors, Ellison is currently executive director of procurement services for the Spring Independent School District.

Distinguished Friends of the University
Tommy Harper and Harry Gee
For more than two decades, Tommy Harper and Harry Gee have served UHD as members of the President’s Advisory Council. Both were involved in the Red Rose Ball, which has provided hundreds of students with scholarship support since the late1990s. Gee and Harper are both accomplished professionals in their own rights.

Gee is a recognized authority on immigration and naturalization law for more than 50 years and has served on myriad professional, nonprofit, and community boards for decades. He also has helped promote Asian-Pacific American causes and propelled Asian-Pacific Americans into leadership positions, founding the Asian-American Coalition and the Institute of Chinese Culture in Houston.

Harper began his professional career in commercial banking in New York City and spent 13 years at executive levels with major banks in New York and Houston. He also spent many years in Houston’s global energy industry and currently serves as director of the nonprofit Spirit Golf Association, which promotes golf for philanthropic purposes, and of the Houston SPCA, where he led its $35 million capital campaign.

The event will benefit UHD’s Compass Points Fund, which invests in the success of UHD students guided by the University’s Institutional Compass:

“We are excited to recognize these accomplished Gator alumni and our supporters, who have made this University what it is today, as we celebrate UHD’s history and the exciting next chapter we open with the Investiture of President Blanchard,” said Jay Zambrano, Vice President for Advancement & University Relations.

Thanks to an overwhelming response, tickets for the Alumni & Friends Celebration Dinner are no longer available, but please join us in celebrating from afar. Click this link to make a gift in honor of this occasion.

For more information or to RSVP for the Investiture, visit the Presidential Investiture website.