The Education of Jackie Aguilera

She considers herself one of the remaining originals as a third-generation Houstonian. She grew up on the Northside (now Near Northside) and East End’s Second Ward.

University of Houston-Downtown alumna Jackie Aguilera believes that her upbringing with a family that was pro-education prepared her for her destiny. She praises her grandparents who were champions of education.

“They (grandparents) were self-made, self-educated and determined self-learners who always knew that education was the key,” she said. Raised by a single mom, Aguilera also credits her mother and uncle for inspiring her to fight for one’s beliefs. “ 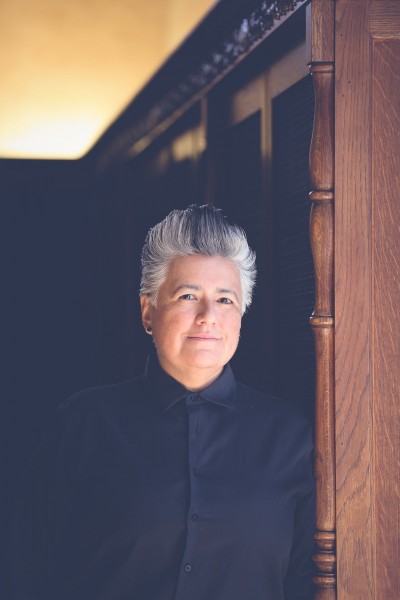 There were times when Aguilera felt the pressure of a multicultural “juggling act” that blended the ethnic background of her grandparents (from Mexico and Basque) and her father’s (from Puerto Rico) as well as being a second-generation American in Texas. Added to her cultural identify challenges, she was also a lesbian born into a very strict and religious family, which posed another juggling act in itself.

“My family was born during a time when assimilation was the push...what many called the white-washing of cultures in America ... melting into a common identity called American. This was the perceived way for many to succeed,” emphasized the oldest of three. “This also meant your sexual identity. Conformity was the norm for everything. I conformed almost in every way except when it came to being a lesbian. I found my rainbow pride and my brown pride at UHD, a place where I didn’t have to be ashamed of either. I was born here and identify as a Chicana or Mexican-American. And I’m out and proud. How great is that?”

“UHD was huge for me,” she said. “When you’re first-gen, you are in survival mode and your family is doing the best they can to help you to navigate the system. UHD gave me a second chance to kick start my education.”

Aguilera’s time as a Gator exposed her to “so much diversity, multiculturalism and most of all a sense of pride. You didn’t have to be two different people,” she said. “You were all of you at UHD!”

At UHD she worked as an English tutor and eventually a College Success Instructor with first-generation students from other countries, who were labelled at-risk, in reading/writing and exam preparation to excel in their studies. “Being able to help students with the skills they needed and seeing them succeed and excel in their studies ... really fueled and fired me up,” she said. In 1989, she earned a bachelor’s degree in General Studies degree with a major in English and a minor in Sociology from UHD.

After UHD, she served a brief stint in retail, followed by a position at Houston Community College in Adult Education, which led to the Houston Read Commission in response to what was known as the “urban literacy crisis.” At the Commission she led many literacy initiatives, wore many hats and she founded the Financial Literacy Carnival—an initiative picked up by McGraw-Hill that became a state-wide funded financial education project.

“All the things I experienced during and after UHD kept telling me that I was meant for education an that I could run, but couldn’t hide,” she said.“ I knew that I wanted to be a part of a process. It was a community effort in raising me and when that happens, you must always give back.”

Aguilera earned a master’s degree in Cultural Studies at Texas Christian University and her involvement in literacy initiatives never waned. In 2008, Aguilera co-founded Houston Money Week, a city-wide financial empowerment initiative. She also later worked on a project to implement the Literacy Coalition of Central Texas’ English @ Work Program. In 2018, she helped organize the Houston Area Adult Literacy Collective provider network and the Adult Literacy Partners of Houston, an award-winning team of providers piloting new apps for adult learners. She spent a number of years in Houston’s Third Ward working in a grassroots adult literacy school, East Side University, where she served as president for almost three years.

She recently landed at The Mayor’s Office for Adult Literacy as a Project Manager to facilitate projects that will optimize service models for adult literacy in Houston, including the Houston Adult Literacy Blueprint, developed in partnership with the Barbara Bush Houston Literacy Foundation that was launched this past June.

“We’re working on policy and advocacy, and I work with a multitude of adult literacy providers affecting thousands of adults and their families across the city, ”she noted. “We’re achieving phenomenal things that are benefitting more than I ever imagined. It’s humbling. Being a part of positive change is what my life’s work is supposed to be about.”

The Education of Jackie Aguilera