The Art Of Theatre 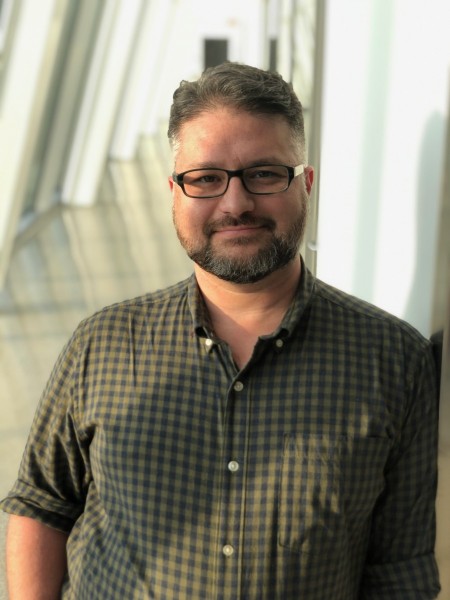 Dr. Dennis Sloan describes his love affair with theatre as being “chased.”

“It chased me,” he said. “When I was a little kid, my mother would tell anyone that I didn’t have toys. I had books and television; those were my toys. I always loved stories and watching them … it entertained and brought me joy. At that time in my life, I knew that I wanted to be a movie or television star.”

His first introduction to theatre was in elementary school, where he played the lead.

“I was Farmer Brown, and everyone else played the seeds,” he said laughing. “In sixth grade, I also played Benjamin Franklin and Cassius in Julius Caesar – a very condensed, childlike version in our school’s cafetorium. I don’t think we knew what was going on.”

Being extremely shy, he believed he wasn’t very good at acting. But his last two years in high school proved otherwise. He was determined to face his shyness head on during his freshman year of high school and joined the debate and public speaking clubs. In his senior year, Sloan also directed and performed in every school production.

He didn’t attend college right away. “I barely graduated from high school ... I didn’t always enjoy going to school,” said the 43-year-old. “I didn’t come from a college family … it seemed like that was what other people did.” During a one-and-a-half-year gap year, Sloan performed various jobs ranging from waiter to hotel reservationist. He enrolled in Texas Woman’s University (TWU) in 1998.

While at TWU, he dived into the university’s Drama Department, where he acted and directed, founded a short play festival, and even co-wrote a grant to the Texas Higher Education Coordinating Board as part of its “Go Theater” initiative. In 2005, he earned a Master of Arts in Drama from TWU. For his thesis, he chose a production of Ed Graczyk’s 1976 play, “Comeback to the Five & Dime, Jimmy Dean, Jimmy Dean.”

After a few stops in New York and California, he earned another master’s degree in Humanities-Aesthetic Studies at The University of Texas at Dallas, followed by his Ph.D. in Theatre from Bowling Green State University. His research interests are Latinx theatre, culturally specific theatre, the history of actor training, queer theatre, and musical theatre.

Shortly after earning his Ph.D., he landed at UHD, just seven months ago. His first impressions?

“I love it so much,” he said. “The community is much more diverse and really is a great companion to my work in Latinx and Chicanx theatre. I really relate to our students … I think they are fantastic … it’s more like home for me. I understand some of the challenges that our students face, and I admire how they face them while remaining committed to doing this thing that they may have thought wasn’t for them … and that really matters to me … that was part of the draw and why I applied for this position.”

In his teaching and research role, the Assistant Professor of Drama is a theatre historian, but for O’Kane Theatre’s production of “The Royale,” Sloan is serving as a dramaturg in the field of dramaturgy. “It’s a notoriously difficult thing to define … the word is always dependent on the needs of the production and the people working on it.” In this case, Sloan will be deploying production dramaturgy.

“We like to think that every play creates an entire world on stage and exists in its own rules and context,” he noted.

The production dramaturg’s primary task is to support the play’s development by asking key questions, starting conversations, researching, providing context, and helping the artists as they work together to tell the intended story.

His job as production dramaturg is to gather information through research and analysis and surround the company (cast and crew) with as much information – books, articles, and links to interviews and podcasts – as possible to be informed about the world they’re sharing with the audience.

“I want the audience to feel inspired and curious … to know and appreciate the power that one voice can have,” he said. “Part of what this play is about is how activism often happens at great personal sacrifice. There’s so much criticism about athlete activists. But I hope that the audience will leave with an understanding of why it must be done and that it’s an honorable, admirable thing.”

So, what is theatre?

“It’s a question that I’ve been pondering most of my life,” he said. “Why theatre? For me, it’s a way to understand each other and a way to connect with experiences that are not our own. It’s not just entertainment … it’s so much more.”

The Art Of Theatre