Thanks For the Memories

A Look Inside the Presidential Memorabilia Collection of Dr. David Fairbanks 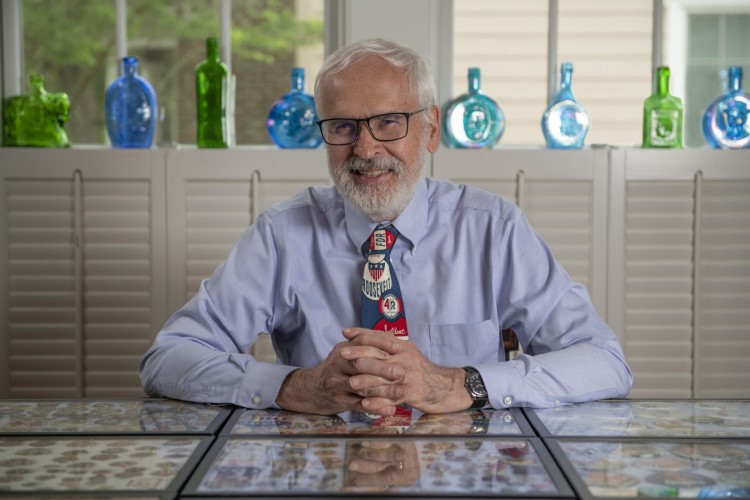 From his years in grade school, he remembers when political campaigns would stop in his hometown of Youngstown, Ohio. Volunteers enthusiastically passed out buttons by the handful, promoting those running for office, and collecting such items became a hobby for Dr. David Fairbanks.

However, it became more than just a hobby. Over the years, the retired UHD political science professor’s collection has turned into a growing assortment of political and presidential memorabilia.

“In those days, candidates relied much less on television advertising and more on campaign pins and brochures to get their name and message out,” Fairbanks said. “It was during the 1956 Eisenhower election when my interest began with buttons. I kept those in a box until the 1960 Nixon-Kennedy campaign when I picked up a few more. As an intern in the Ohio State Senate during the 1972 election, I had plenty of opportunities to add to my collection.”

Fairbanks, who joined UHD in 1976 and taught courses on the American presidency and urban politics, is quick to point out that his collection of thousands of items includes a variety of political memorabilia from state, national and even foreign campaigns.

“It’s true that the buttons are a major part of the collection, but there is so much more than just buttons,” he said.

Visitors to Fairbanks’ home will find thousands of those famous buttons, as well as other pieces of memorabilia, dating back to President Martin Van Buren. His collection also features brochures, letters and correspondence from past presidents and politicians, postcards, posters, old newspapers, ties, scarves and life-size cardboard cutouts.

He also takes special pride in his collection of letters from political officials.

“What greatly influenced my interest in politics and collecting were the contacts I started making with political figures in high school. I used any excuse I could to write congressmen and senators,” Fairbanks noted. “I like showing off letters from Herbert Hoover and Lyndon Johnson. I also had family members pass on letters from Teddy Roosevelt and Bess Truman.”

Another one of his prized possessions is a large collection of campaign material from the 1904 Roosevelt presidential election when Charles Fairbanks was Roosevelt’s vice presidential running mate.

“Obviously, I was drawn to this campaign not only because it was Roosevelt, but because of the distant family connection I had with his vice president,” he said with a grin.

With all of the historical memorabilia, Fairbanks said adding itemsto his collection does not put a dent in the pocketbook.

“I’ve rarely paid over $100 for an item. Many of my favorite pieces didn’t cost anything at all,” he noted.

Unfortunately, in the 1970s, most campaigns stopped producing buttons in large quantities, so there are far fewer buttons being given away today than when Fairbanks was younger.

“It’s amazing what you sometimes can find in the most unexpected places.”

Sharing History With Others

Fairbanks and his wife have been hosting parties, on Presidents’ Day at their home for more than 25 years. At these parties their entire home is transformed into a museum of presidential memorabilia. Many of Fairbanks’ former students attend as well as his neighbors and colleagues from UHD.

“We had more than 80 people visit this past February over two days,” Fairbanks said. “I really enjoy it when we have kids from the neighborhood who come by. It’s not just something they are seeing in a textbook. The great thing about collecting historic items is that you are keeping a heritage alive for future generations.”

Thanks For the Memories