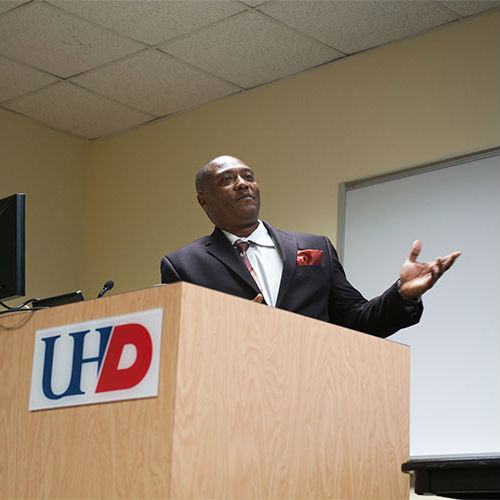 Graves addresses a crowd of UHD students, faculty and staff on Wednesday.

Anthony Graves, the 138th person exonerated from America's death row, delivered an address to a crowded lecture hall on the University of Houston-Downtown campus Wednesday afternoon.

"I want to make something clear. I'm not here to beat the criminal justice system," Graves said. "I'm on a mission to encourage reform for a fair system, and you are the young people with the power to make that happen."

He challenged the audience to ask intelligent questions, starting with "Does the death penalty work?"

Graves submits that it does not, pointing to the 146 inmates, himself included, who have been exonerated from death row. A study by Michigan State University estimated that 4 percent rate of defendants who are sentenced to death have been falsely convicted.

Free me or kill me

Graves' story began in 1992, when six people - four of them children - were violently murdered near his hometown of Brenham, Texas. The prime suspect in the crime, Robert Carter - a man who knew Graves only in passing - had named Graves as his accomplice.

Despite a lack of physical evidence tying him to the crime scene, law enforcement charged Graves with capital murder and brought him in for questioning.

"I was living a nightmare," Graves said. "I thought there was some little mistake, that they had called me in for a forgotten ticket. And here were these Texas Rangers calling me a baby killer and everything else but a child of God."

In 1994, a jury convicted Graves and sentenced him to death. He could not fathom how he had gone from being at home with his family to receiving a death sentence. The story wasn't over for Graves, however. He intended to continue fighting to prove his innocence.

Never wavering from his story and refusing several plea deals, Graves's motto became, "Free me or kill me." Still, he found himself caught in a system that was not working in his favor.

5 Students listen intently as Graves tells the story of his journey through the justice system.

"People often say our system is broken," Graves said. "It's not a broken system, it's one that was designed in a time when men like me didn't even have rights. It's a perfect system, it just needs updating."

A voice for the voiceless

Graves spent 12 years in solitary confinement on Texas's death row, during which time the state executed more than 350 inmates. He shared with the audience the behaviors he witnessed from many of the inmates that he recognized as mental disorder.

"The conditions are totally inhumane and driving people crazy," he said. Others were suffering from mental illness before they got there. We are killing sick people instead of finding ways to treat them."

In 2006, the Fifth Circuit Court of Appeals overturned Graves's conviction, citing prosecutor Charles Sebesta's suppression of a statement made by Carter, confessing he had acted alone in the crime. The state had 120 days to either release Graves or declare a retrial.

In September 2006, Graves was released from death row, only to be transferred to Burleson County Jail to await retrial in solitary confinement. He remained there for four years.

During that time, several prosecutors took the case and subsequently removed themselves from it. The county brought in Kelly Sielger - a famed prosecutor known for her perfect record in capital murder cases - to try the case.

Siegler worked diligently to build a case against Graves, to no avail. In an interview with Texas Monthly magazine, Siegler said, "I can't pinpoint the exact day, but our thinking evolved from 'We have insufficient evidence to go to trial' to 'This is an innocent man.'" She saw no other option but to drop the charges.

5 Students line up to shake hands and take photos with Graves.

Graves now aims to change the culture in America's criminal justice system - one he claims places too much pressure on law enforcement to secure convictions, some at any cost.

A student in the audience asked the exonoree and activist what college students could do to make a difference in cases like his.

He encouraged the audience to be active in the criminal justice system by volunteering to sit on grand juries, reporting to jury summonses and holding legislators accountable for making improvements.

"We are our brothers' and sisters' keepers, and we have to take that role seriously," said Graves. "We need reform for a fair system. We must put safeguards in place to protect against our own biases."