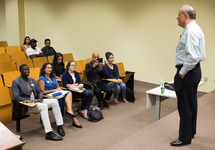 With November elections quickly approaching, Texas Secretary of State Carlos H. Cascos is traveling the state through Election Day to remind voters about photo identification options for voting in person.

On Thursday, Sept 15, Cascos stopped at the University of Houston-Downtown (UHD) to speak to a group of political science students. UHD political science professor David Branham helped coordinate the event and hosted Cascos during his visit. While Cascos discussed many issues, his focus was on encouraging voter participation and promoting his Vote Texas campaign — a statewide initiative to engage both students and new Texans through the Nov. 8 election about the state's voter identification law.

Cascos was appointed Secretary of State in 2014 by Texas Gov. Greg Abbott. Within this role, Cascos serves as senior advisor and liaison to the Governor for Texas Border and Mexican Affairs, and as Chief International Protocol Officer for Texas. Now, Cascos has taken up a new challenge.

"I'm here to remind voters and future voters that every vote does count and every vote matters," said Cascos. "As the state's chief election officer, it's my responsibility to inform you of the options and resources available to help you exercise your right to vote."

Many Texans already have an approved photo ID. Those types of photo IDs include a Texas driver license, Texas identification card, Texas concealed handgun license, U.S. passport, U.S. military ID or a citizenship certificate. With the exception of a citizenship certificate, all IDs must be current or expired no more than 60 days at the time the ID is present by the voter.

Voters who do not have one of the seven forms of acceptable photo IDs listed above may still be able to vote by mail, through an exemption, or by getting a free Election Identification Certificate, if qualified. Other options include a utility bill or bank statement. More information on exemptions can be found here.

During his visit, Cascos acknowledged a number of valid reasons students may not vote, including not being of voting age. He also addressed feelings of distrust in government or political ignorance that might prevent others from casting ballots.

"Those are valid excuses but those are not valid reasons," said Cascos.

Students in attendance said Cascos' message inspired them to get informed, get registered and get to the polls. Hatziri Rancano, vice president of UHD's Student Government Association (SGA) said the message inspired her as a leader to keep encouraging people to vote.

"SGA is hosting 'Walk to Vote' in October, and our goal is to get 3,000 students to register to vote. After hearing today's message, I'm confident the goal is both realistic and attainable."

Cascos kicked off his campaign tour August 2016 making his first stop at University of Texas at Austin, his alma mater. He will continue to promote his campaign throughout the state encouraging students to vote. Cascos says he will even visit small high schools.

"No group is too small, he said. "Quantity doesn't matter. It's about the quality of the message."

Cascos encourages voters to take full advantage of the convenience of voting early. The last day to register to vote is Oct. 11. Early voting for the Nov. 8 election begins Oct. 24 and ends Nov. 4.

Any citizen who does not have an approved photo ID can apply for a free Election Identification Certificate and should visit VoteTexas.gov or call 1-800-252-VOTE for more information.

Voters can contact their county elections office to locate the most convenient polling place, or follow the links at VoteTexas.gov. During Early Voting, polling place times will vary from county to county.