Taking Youth Off the Street

A pivotal study by a cadre of Houston-area universities and nonprofits is changing the way Houston addresses its significant incidence of youth homelessness - while working to create a sustainable model for tackling this issue nationwide.

The Homeless Youth Research Project (HYRP) is a collaboration among prominent social service leaders in Houston that seeks to identify key factors leading to youth homelessness, expand programs for homeless prevention, and establish an effective model of counting homeless youth throughout Harris County.

The National Alliance to End Homelessness notes that, "You can't solve a problem without knowing the scope of the problem. Once local communities have a better grasp of how many homeless youth they have, they'll be able to scale interventions for youth with more accuracy. That being said, we're still a long way from knowing what interventions are the most effective at ending youth homelessness and even the interventions we currently have fall woefully behind the need."

"CPSFS underwrote phase one of the study because it aligns with the Center's mission and allows a vehicle for CPSFS to become a leading partner with the city and county in improving quality of life for families and the community," said Noël Bezette-Flores, Ph.D., executive director of CPSFS at UHD, board member of the Homeless Youth Network of Houston/Harris County, and chair of the Homeless Youth Count Project advisory board.

Study results indicate that homeless youth move from place to place frequently, separate themselves from each other and homeless adults, participate in risky behaviors to meet immediate needs and seek help from homeless service providers as a last resort.

Homeless youth surveyed reported attitudinal barriers to shelter use, including pride and stigma, access barriers, including a lack of services and transportation, and structural barriers, including age restrictions and constricting shelter rules pertaining to curfew and use of technology, along with familial factors leading to youth homelessness.

Findings from phase one of HYRP will inform the point-in-time count methodology for homeless youth, support the need for health promotion and risk reduction interventions by identifying the magnitude of the problem, support the need for expanded housing that considers specific concerns of homeless youth, and underscore the importance of expanding the definition of homelessness from the current U.S. Department of Housing and Urban Development criteria.

HYRP researchers recently convened at the Homeless Youth Network of Houston/Harris County's annual forum to share results of phase one of the study with representatives from more than 100 nonprofit, governmental, educational and faith-based organizations.

In the second phase of the project, set to begin in fall 2014, HYRP researchers will further consolidate their study results and work to build a more effective national model for counting the notoriously elusive homeless youth population.

"As the Homeless Youth Network of Houston/Harris County continues to create awareness and community support for homeless youth, we must have a good methodology for understanding the size and significance of this issue," said Joel Levine, Children's Services Division administrator at Harris County Protective Services for Children and Adults. "HYRP focus groups have been a great start and I look forward to the next phase, including an innovative methodology to more accurately count homeless youth." 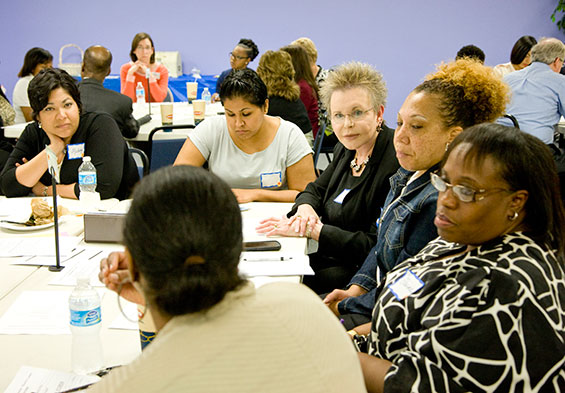 (Left to right): Melody Barr, UHD alumna and administrative manager at the City of Houston, joins Myrna Garza and Paulette Purdy of CPSFS for a table discussion. 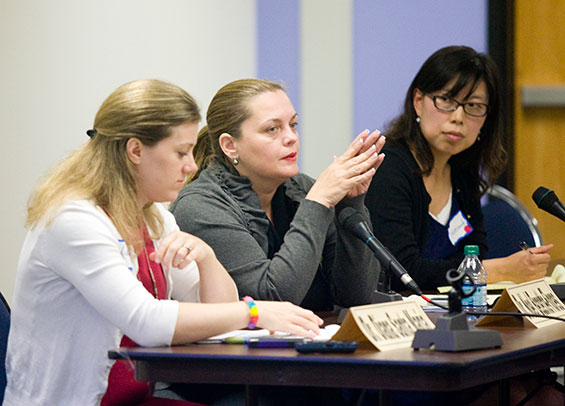 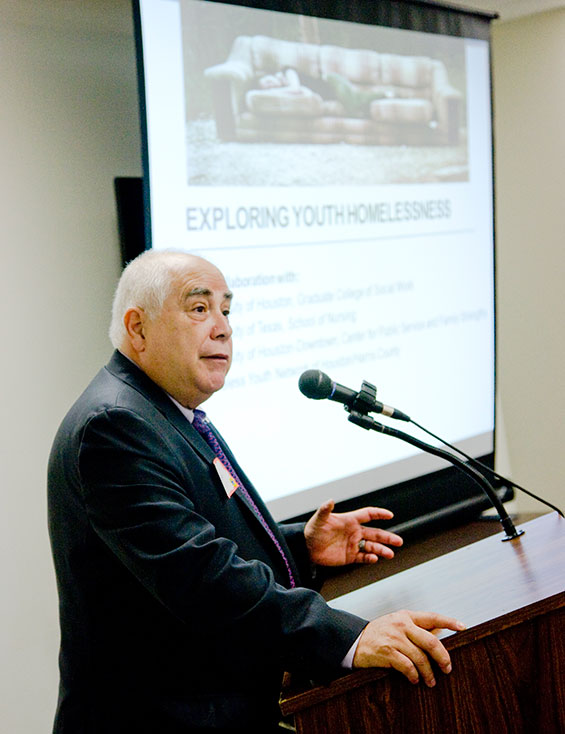 Taking Youth Off the Street