The President's Lecture Series on Justice, Equity, and Inclusion launched in 2021 with in-house and third-party experts joining UHD to discuss critical topics facing campus communities today. A key component of the series was to “build a more equitable and just environment through grant-supported, student-led outreach.” To that end, all University students were invited to submit a proposal for a Justice, Equity, and Inclusion mini-grant that would provide support and resources to design community programs focused on racial, economic, and social justice issues impacting members of the UHD student population. Six student projects have been awarded a mini-grant so far. The first grant recipient, Kaethleen Siguenza, is featured in this story. Other projects and recipients will be covered in future UHD News stories. 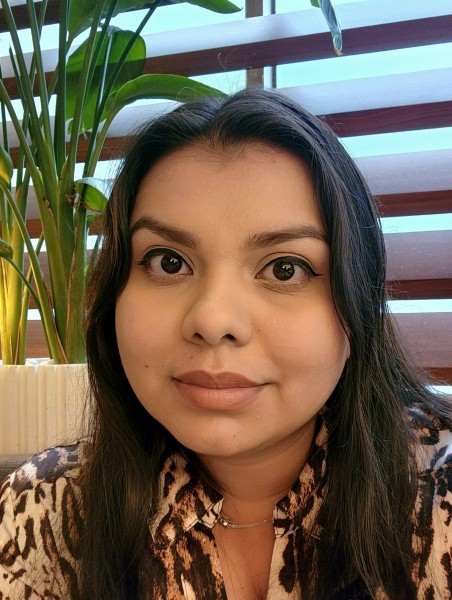 “Neither of my parents had the opportunity to finish their education, so when I graduate college, I will be the first in my family to do so,” said Siguenza. “After a five-year break from college, I returned to finish my degree because I wanted to show my two children, Alina and Jace, the importance of completing a college education.” Siguenza is currently studying Computer Science in the College of Sciences & Technology at UHD.

Siguenza was processing a lot of ideas surrounding sustainability when she heard about the Student-Led Success & Equity mini-grant. “The motivation behind my proposal for ‘Swap Don't Shop’ came from multiple sources,” she said. “During orientation, I saw the positive impact of the on-campus Food For Change Market, and I became inspired to help. Around the same time, the question of how ethical it was to shop from ‘fast fashion’ brands began trending on TikTok. I also saw a report on how secondhand clothing from Western countries was contributing to the intense pollution of Ghanaian beaches.”

She synthesized those current events with her desire to help others to imagine “Swap Don't Shop.”

“I wanted to give students the opportunity to help one another by swapping or donating clothing they no longer needed. In doing so, we collectively increased sustainability around campus and helped students who lacked the time or resources to buy clothing,” Siguenza said. “During our second event, a student told me that she wears every item she got at our first event to class, and another student told me that he found slacks just in time for an upcoming teaching opportunity.” That feedback helped her know that “Swap Don't Shop” was on the right track and had a positive impact on students.

Siguenza shared that carrying out the project was a learning experience not without difficulties. Although it was her first semester at UHD, she quickly learned who to contact to secure permissions for posting flyers on campus and where to get free printing. She ended up recruiting other students to help with the project.

“Despite all the planning put into this project, anyone who attended our first event could tell you how chaotic things were. The clothing quickly became disorganized, but thankfully, students who came to the event were understanding and many began helping on the spot. Our second event went more smoothly. I met great people along the way and I am thankful for those who helped. It takes work to put on an event at UHD, and I had the opportunity to learn a lot because of the mini-grant.”

“The events are fun, but I feel like having a free community store on campus where students can donate and take all kinds of items (school supplies, home/seasonal decor, etc.) will benefit all students,” she said. “For example, my kids are constantly outgrowing their clothes and toys. Instead of having these items end up at a landfill or going to a resale store, they can stay within our local community and possibly help out another student who is also a parent.”