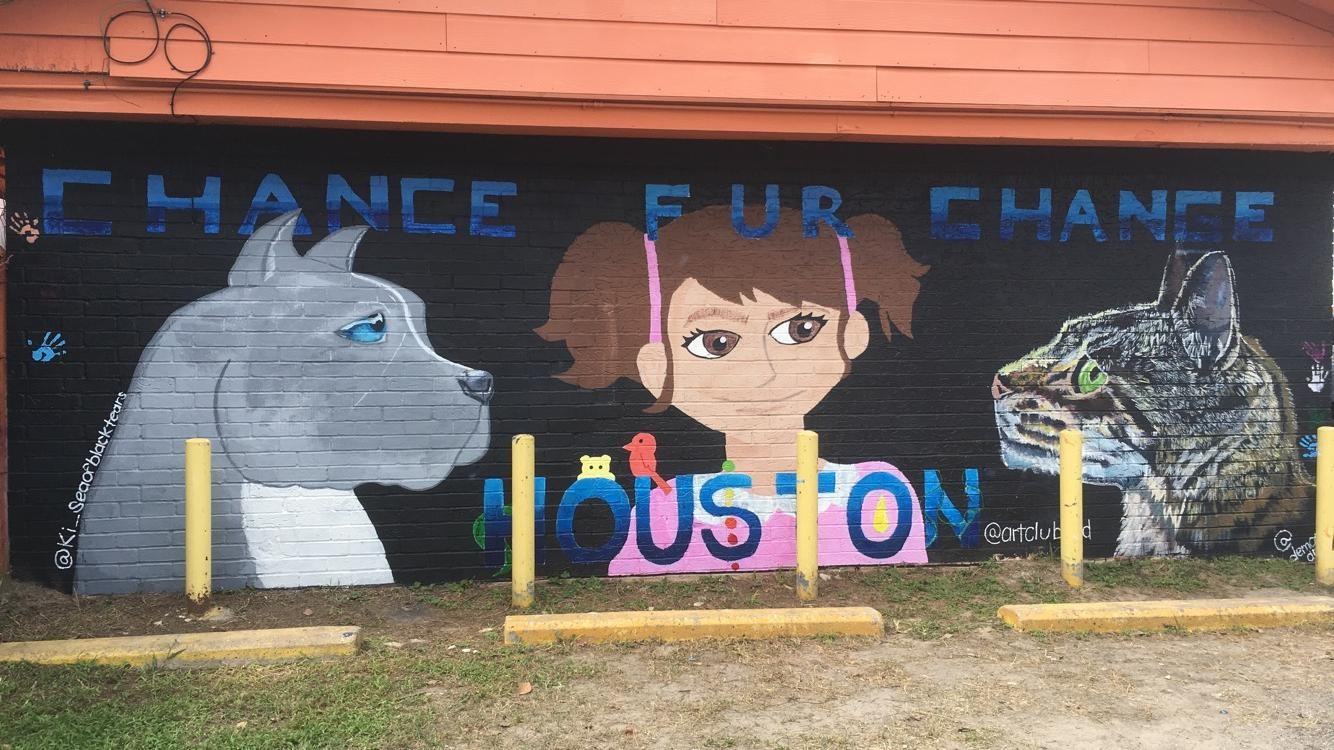 Each day, thousands of homeless dogs and cats wander Houston’s streets. These animals are often victims of neglect or abandonment. They also are a stark reminder of the importance of spaying and neutering pets.

Thanks to University of Houston-Downtown student Mikaela Lopez, Houstonians are becoming more educated on the plight of pets needing families. Lopez, a 2019 Newman Civic Fellow, has contributed her energies to promoting awareness of the homeless animal epidemic in the Houston area, particularly the Near Northside. As part of her fellowship and with a grant from UHD’s Center for Community Engagement & Service Learning, Lopez started the website ChanceFurChange.com aimed at sharing statistics, adoption tips and other information to assist lost dogs and cats.

The website, however, was just the start for Lopez, who enlisted the assistance of the UHD Art Club to create a public art piece that enlightens Houston on the plight of the homeless pet population. Led by club vice president Kelsi Rios, student artists created a mural for an external wall at Jax Sports Bar (6416 Wallisville Rd.). The painting depicts a young girl flanked by a dog and cat against a black background with the words “Chance Fur Change.”

During the creation of this artwork, a few stray animals even ventured to the bar to greet the artists.

“It was really unusual,” Rios said. “We’d turn around and there would be a dog or cat just watching us as we worked on the mural. We would feed them and give them water. They would hang out for a while then leave.”

This fall, the students in conjunction with the owners of Jax Sports Bar hosted a mural opening to celebrate the new artwork. Lopez, Rios and fellow students capitalized on this event to further promote pet care and rescuing homeless dogs and cats. They passed out flyers and reminded attendees about the Chance Fur Change website.

“It felt great,” Lopez said of the opening event. “I was beyond happy to see so many people turn out and respond to the painting. And, it was incredible to reach even more people and spread awareness of the homeless animal problem in our city.”

Although the mural took two months to complete due to weather issues, conflicting schedules, and other factors, it is now a permanent part of the community. For Rios, the artwork is particularly meaningful as she and her son discovered their pet—a dog named Nacho—as a stray puppy.

“I’m ecstatic to have worked on a public mural, particularly one that communicates such as strong message,” she said. “The owners of Jax have told me that people are taking photos with the mural, and that in itself is very validating.”