After watching his son, Shawn, endure three life-threatening surgeries for a congenital anomaly, the first when only 10 days old, UHD sophomore Matthew Murphy believes his child overcame the impossible. In honor of Shawn, now a healthy three-year-old, Murphy was inspired to overcome what he deemed most impossible for him - competing in the IRONMAN® World Championship as a 37-year-old, overweight smoker.

"As heart-wrenching as it was to watch Shawn fight for his life, I made a promise to my wife that we would use his struggle to inspire and support other families dealing with rare birth defects," said Murphy. "I'll never forget the loneliness we felt when our doctor told us that he had never seen a case like our son's. Our mission now is to ensure that other families have the resources we lacked and to provide education, hope and help."

Shawn was born with a bilateral urethra, a condition that occurs in one of every 35 million births. Murphy asserts that he had a better chance of winning the Texas Lotto, with odds of one in nearly 25 million. Lawrence Cisek, M.D., a pediatric urologist at Texas Children's Hospital, discovered Shawn's condition - in addition to his multi-cystic dysplastic kidneys - when he performed an exploratory operation after surgically closing Shawn's belly button in his second week of life. Following this surgery, a team of doctors operated on Shawn again when he was eight months old and 14 months old to redirect his urinary system and repair his tethered spine.

Like Shawn's significant challenges, becoming a triathlete was no easy task for Murphy. But thanks to his determination, he lost 50 pounds and completed 17 endurance events - including his first IRONMAN competition involving a 2.4-mile swim, a 112-mile bike ride and a 26.2-mile run last May. Also motivated to contribute to the Shawn's Anomaly Research Fund established by Texas Children's Hospital, he raised $10,000 of the $25,000 needed to launch additional research into pediatric birth defects.

He recently entered IRONMAN's "Kona Inspired" contest, which provides triathletes from the United States, Australia, Germany, Mexico and Canada with the opportunity to share their inspirational stories to win one of seven coveted slots into the world's toughest one-day endurance event. Winners also receive $10,000 from The IRONMAN Foundation in honor of the athlete's charity of choice.

For Murphy, that decision is a simple one. He and his wife, Rachel, established a nonprofit called, "Shawn's Anomaly" in 2011 to bring awareness to congenital birth defects, the leading cause of infant death. Since that time, Murphy has befriended numerous families throughout the country struggling with similar health issues.

The hundreds of applicants in the Kona Inspired contest tell their individual stories through 90-second videos they upload to the IRONMAN website, showing how they represent the company's mantra, "Anything is Possible." After a preliminary public voting period, the organization will select 45 finalists and the public will once again have the opportunity to vote for their favorite stories and select seven athletes to join some of the world's strongest competitors in the world championship on October 12.

IRONMAN chose Murphy as one of its 45 finalists in the inaugural Kona Inspired contest last year, but he fell short of winning by the narrowest of margins. This year, with votes from his fellow UHD students and the public, he hopes to earn one of the sought-after slots this June. His ultimate goal is to "become an IRONMAN for all children born with congenital birth defects" when he carries a flag with their names across the finish line.

To enhance his ability to raise awareness about the need for additional birth defect research, Murphy has reconsidered his academic path. "After serving in the Navy and working as an engineer by trade, I came back to college to earn a degree in communications so that I can better communicate and persuade people to join our cause to prevent congenital anomalies."

Houstonians can watch Murphy's inspiring video and vote for his "Shawn's IRONMAN" story at www.konainspired.com through May 13. The public also can follow the progress of Murphy's mission at www.shawnsironman.com and his son's journey to health at www.shawnsanomaly.org. Facebook pages, created for both of these stories, also allow visitors to vote for the family's Kona Inspired video.

"If Shawn can overcome impossibilities, then I can, too," said Murphy. "And all together, we can prevent devastating birth defects from affecting any more families." 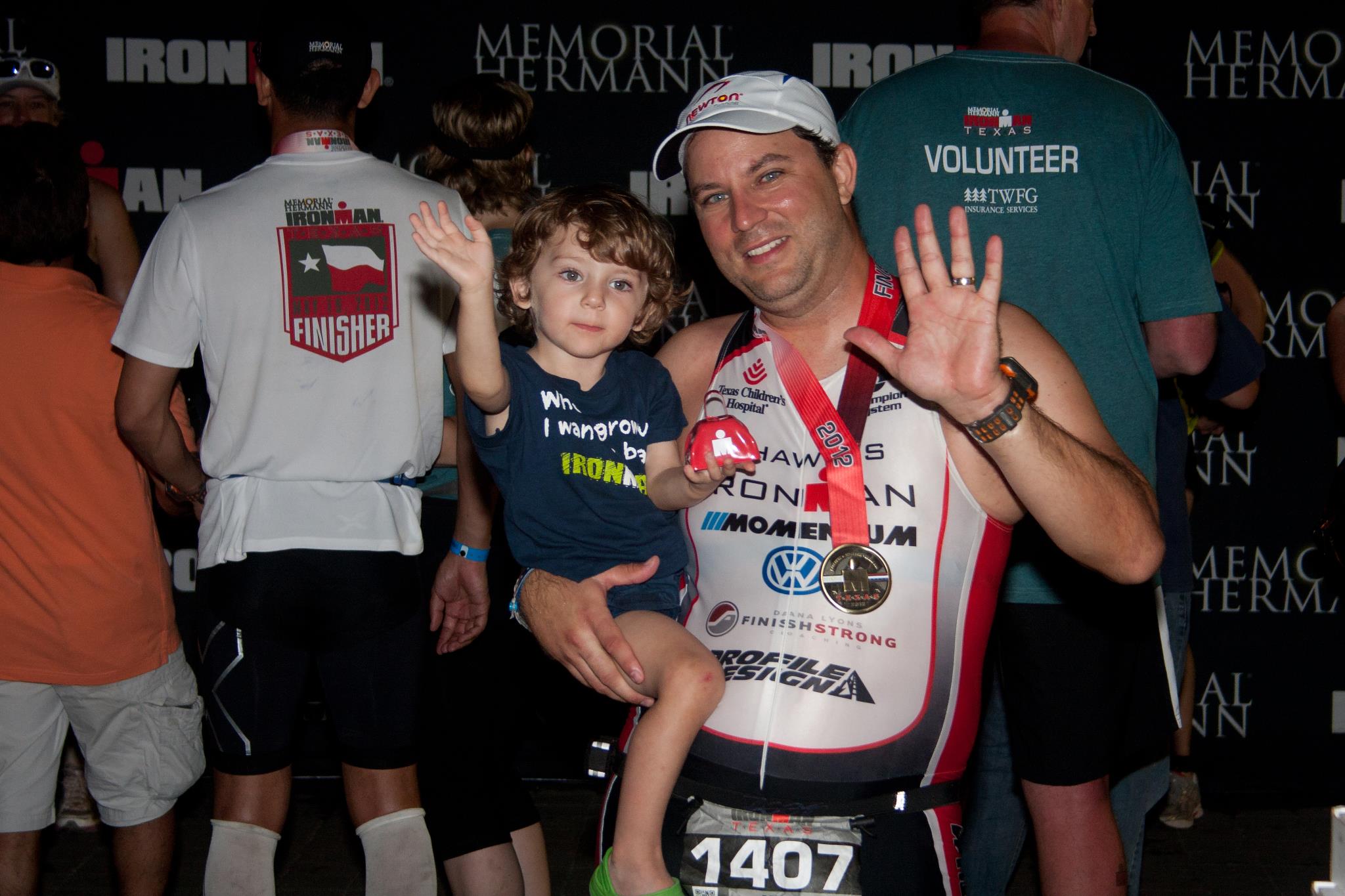 UHD student Matthew Murphy holds his son, for whom he created the "Shawn's Anomaly" nonprofit, at the finish line of IRONMAN Texas in May 2012.