Student is Star and Supporting Cast in Edge Theatre Production 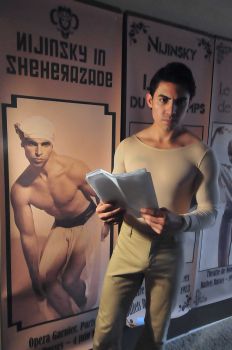 A strapping ex-Marine from Spring Branch seemed a reasonable choice to portray the athletic ballet star Vaslav Nijinsky, but Darnea Steven Olson's acting talent is what got him the lead role - as well as every other role, male and female - in "Nijinsky's Last Dance."

"It's taken me three years, but I've finally found the actor who can pull it off," said director Jim Tommaney.

Olson, 27, wowed him at The Alliance Auditions, a unique casting session that enables actors to present a two-minute monologue to representatives of about 40 local theaters at once.

At this year's Alliance event June 29-30 at Stages Repertory Theatre, Olson (whose first name is pronounced Dar-NAY), performed a monologue by Biff from Arthur Miller's "Death of a Salesman."

"The line delivery was great and the pauses, even better, indicating a grasp of the material that was brilliant," said Tommaney. "And he even looks a lot like Nijinsky."

"It's a 90-minute one-man show in which the actor plays nine characters," Tommaney said.

In addition to the title character, the roles include the sculptor Auguste Rodin, impresario Sergei Diaghilev, ballerina Tamara Karasavina, a French prostitute, a Russian instructor, a gypsy girl and Nijinsky's sister, Bronia, and his wife, Romola.

"It's pretty difficult," said Olson, "but it's fun because it's all on you. You get to showcase a number of different personalities that you might be able to project."

A 2004 graduate of Spring Woods High School, Olson didn't begin studying fine arts until he finished a four-year tour of duty with the U.S. Marine Corps in May 2011. The next month, he enrolled in at the University of Houston-Downtown, where he studied "Death of a Salesman."

The Alliance Auditions was "a high-anxiety situation," he said.

"It's kind of crazy. You walk in very robotic and get up onstage and say your name. When you reach your two-minute mark, you say 'Thank you' and walk off."

"Darnea gave the best audition, out of over a hundred, at the Alliance Auditions," said Tommaney, who began rehearsing Olson for the part three days a week in a space at Tommaney's Galleria-area apartment until they could move into the Midtown Arts Center.

Explaining the process of rehearsing a one-man show, Olson said, "We go until something isn't right."

Early on, the pair decided that Olson would perform some upper-body dance movements to approximate Nijinsky's talent, but nothing beyond that lest it detract from the dancer's genius as both a dancer and choreographer.

Ninety percent of the play can be read online at www.playscripts.com.

"The missing 10 percent is at the end where we see him 'lose it,'" said Tammaney, referring to the dancer's public mental breakdown during the premier of his ballet to Igor Stravinsky's "Le Sacre Du Printemps (The Rite of Spring)."

Student is Star and Supporting Cast in Edge Theatre Production