According to Christine Varghese, it was divine intervention that pushed her into becoming an activist against human trafficking.

Varghese, a senior microbiology student at UHD, became aware of human trafficking after watching an anti-slavery video during a conference at Lakewood Church in Houston. Varghese was later introduced by a Bible study leader to Cat French of Exodus Cry, an international anti-trafficking organization. With French and others, she began learning about the trafficking problems in Houston.

"It's crazy how prevalent human trafficking is here in Houston," Varghese said. "There are over 160 known brothels in Houston, which is amazing. Can you imagine how many unknown brothels there are?"

In January 2012, Varghese traveled to India on a mission trip with Bombay Teen Challenge, an organization that is dedicated to rescuing and caring for sex slaves in the brothels of Mumbai, children of sex slaves, juveniles roaming the streets, addicts and runaways.

With the BTC team, Varghese visited red light district brothels in Mumbai to actively pull girls out of slavery or minister to them.

"It was incredible because the whole situation was surreal," she said. "I kept asking myself, 'What more can I do, who else can I help.'"

At UHD, Varghese is studying microbiology and is the organizer for UHD Revolution, a seminar about human trafficking that aims to raise awareness about this issue in Houston.

"Houston is a major hub for human trafficking, in part because of the ship channel," Varghese said. "About 25 percent of all people trafficked in the U.S. end up in Texas."

After completing her bachelor's degree this semester, Varghese hopes to earn a master's degree in public health. She believes this will allow her to help more women and children on a bigger scale. 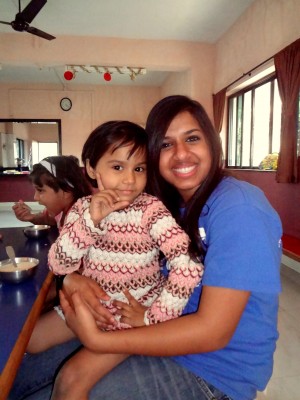