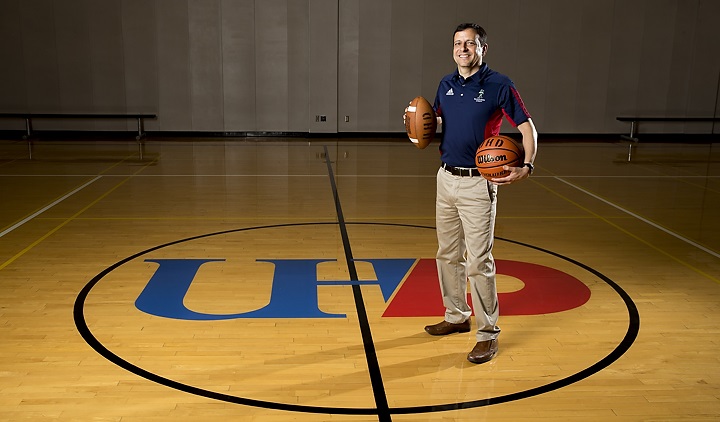 Walking through the Jesse H. Jones Student Life Center at the University of Houston-Downtown (UHD), it's hard to believe that it's still recovering from Harvey. During a recent midday visit by Dr. Renu Khator, University of Houston System Chancellor, the center was buzzing with activity. Khator and host Dr. Juan Sánchez Muñoz, UHD President, witnessed a bustling fitness center with workout classes in full swing and campus community members pumping iron and burning calories.

On closer inspection, however, they observed the damage to the West Gym, which is still undergoing remediation and remains closed. The rest of the Center, however, is operational. Its quick recovery is a testament to the tenacity of UHD's facilities team and the Sports and Fitness staff led by Richard Sebastiani.

"The response during and after the storm was very quick," said Sebastiani, director of Sports and Fitness. "There was a great concern for our faculty, staff and students who use this facility."

Sebastiani has steered the Student Life Center through a number of renovations and changes during his many years at UHD. The Harvey experience, however, was new for the veteran staff member and sports and fitness professional.

"I can only imagine that the waters were like a raging river coming into the building, Sebastiani said. "It's far worse than anything the Student Life Center has ever experienced."

Fitness has always been important to Sebastiani. Born in Pennsylvania, he always enjoyed sports, and had a favorite team … that was NOT the Philadelphia Eagles or Pittsburgh Steelers.

"I loved the Dallas Cowboys," he laughs. "And that was hard growing up in the same state as their rivals the Steelers and Eagles."

Following a family move to Houston, Sebastiani found himself in the same state as his beloved Cowboys, but not the same city. Still, he developed an interest in one of Space City's hometown teams, the University of Houston Cougar basketball team—then known as Phi Slama Jama.

He enrolled as an economics major at UH right after Phi Slama Jama's final years. While attending UH, he began working at UHD's residence hall in 1985. The facility was located where the Commerce Street Building now sits. Sebastiani served as a student supervisor at the residence hall, which was previously a hotel.

"This may have been the only university residence hall to host a bar," mused Sebastiani. "It was previously a hotel, but the lease on the lobby bar hadn't expired yet, so its owners kept it open. We also had a swimming pool."

After earning his undergraduate degree, he remained at the University of Houston to earn a master's in sports administration while working at UHD. Sebastiani was promoted to coordinator of recreational services, overseeing UHD's second floor game room and gym. He also oversaw development of UHD's intramural teams.

With the construction of the Jesse H. Jones Student Life Center in 1997, Sebastiani was promoted to his current title as director of Sports Fitness. Around that time, he saw an increase in intramural sports participation and a need to expand competitive play beyond the campus.

"We looked around and realized there are plenty of colleges and universities in our area that also are seeking competition," Sebastiani added. "We expanded beyond on-campus intramurals to Club Sports to compete against area schools."

These teams are not NCAA-sanctioned, but offer students an opportunity to represent UHD on the field and compete against local and regional institutions.

"There are many benefits to participating in club sports," Sebastiani said. "Students can burn off stress, and they also develop leadership and social skills. Club sports offer many educational opportunities outside of the classroom, and they provide students with an opportunity to showcase their pride in our institution."

Sebastiani encourages faculty and staff to support UHD's Gator teams during home games, and also recommends that everyone take advantage of the services and amenities available at the Student Life Center. Earlier this year, the Center celebrated its 20th anniversary and continues to offer service, such as massage therapy, personal trainers and classes to the University community.

"It's a place to feel good," Sebastiani said. "Our Center provides a place to exercise and socialize. If you haven't made time to work out here or visit, come by. This Center has been through a lot over the past year, but it's still standing and ready to serve faculty, staff and students."