Courtesy of the South Belt Leader

When one door closes, another one opens. Maybe a well worn-out cliche, but it's worked wonders for many of those willing to put in the hard work in Dobie's new found powerlifting program.

After only three or so years of serious competition in the sport, the Longhorn lifters are now realizing and taking advantage of opportunities in the sport after high school. Just this school year, five lifters from Dobie have signed on to compete on the nationally recognized powerlifting team at the University of Houston-Downtown. The benefits aren't great. The university offers merit scholarship funds per academic success. UHD coach John Hudson also has a very limited pool of funds to dip into for help. Because the sport is of the club variety, there are no athletic scholarship monies available, yet it's still an opportunity well worth taking. The Dobie lifters deserve the credit. Most of the athletes in the powerlifting program previously competed in other sports, but competition beyond high school in those sports is where the door closed. Enter powerlifting.

Kenneth Foster, an assistant coach on the Dobie football staff, agreed to take over the program's guidance in 2010. In short order, he has worked wonders. A chance meeting with Hudson three years ago has also paid big benefits. Hudson was called to host a brief powerlifting clinic. He did just that, and he came into contact with not only the athletes but the way they handled their business in the weight room. The rest, to a large degree, is history.

Hudson enjoyed a highly successful powerlifting career in college before taking on the coaching ranks. Hudson had previously overseen programs at the University of North Dakota, a university in Korea while he was doing some graduate work there, and then also at the University of Illinois. As a collegiate athlete, Hudson recalled often being the lone lifter representing his program. Meanwhile, other colleges usually brought an entire team of lifters. While funds are limited at UHD and there is no money available through athletic scholarships, Hudson has been able to mold the program in his shape since starting it in 2007 with the university board's blessing.

"In college I always wished I could enjoy the feel of that true team feeling like I had seen with some of the other programs," Hudson said. "Now here at UHD as a faculty member, I have been able to run things the way I think they should go. We are still a club program and have to basically build things on our own, but we're doing it."

Competing in the World Association of Benchers and Deadlifters, UHD won national titles each year from 2008 to 2010 and again in 2012. "The athletes are sticking with the program, and we now have more than 20 transfer students coming in this fall," Hudson said. "That's big, because we want to compete in the United States Association Powerlifting Association. To do that, we will be required to field and maintain complete men's and women's teams."

In doing so, Hudson also hopes to more often match his competitors against those from other Texas and regional colleges such as Texas A&M, Texas, Louisiana State, Louisiana Tech and Louisiana-Lafayette. A move to the USPA also mean's UHD lifters will now add the squat to their list of requirements, something the incoming Dobie lifters are already familiar with. More importantly, Hudson simply loves the way the Dobie competitors go about their business.Invited to put on a clinic at Dobie in the spring of 2010, Hudson came away impressed with Foster and his ever-growing group. Over the last couple of years, Hudson has followed the progress of many of the Longhorns, including the five who will be attending UHD beginning this fall.

"The Dobie kids work hard, and they're great kids who are coachable," Hudson said. "They want to learn, to improve. They're a delight to work with. On top of that, coach Foster is different from some of his peers in many situations in that he is open to the teachings of someone like myself. Take Juan Santos for example. He's a very quick learner who has been in the sport for just one year. He was benching 235 pounds when I first started working with him. I showed him a technique, and he was quickly up to 292. Now he's over 300 pounds. He went back to Dobie with the technique, and coach Foster was open to the idea of learning. It's just been a great combination of kids wanting to learn and someone like me needing those types of kids."

At the end of the day, it's all about graduating from college with a degree. Hudson certainly expects that from these kids. "Our university has really made a great effort to help in the growth of the program through the merit scholarships and some of the academic monies," Hudson said. "In return, they expect us to represent the college with the utmost respect. When I am looking for newcomers, I like to watch how they react when they miss a lift. Some kids throw towels and other things and get irritated more easily than others. Some of it is normal, but we want kids who are going to be respectful of the sport, our university and themselves. I can definitely say we are getting that with the infusion of these Dobie athletes into the program."

Foster said he has been both amazed and honored at the growth shown within the program. The powerlifting program had long been dormant at Dobie until about five years ago when it started up again. Since then, Foster has overseen a ton of success. Lifters such as the five headed to UHD have, quite simply, maximized an opportunity. The door opened, and the Dobie athletes walked through. 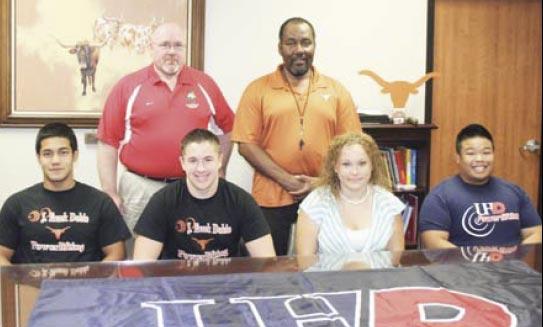