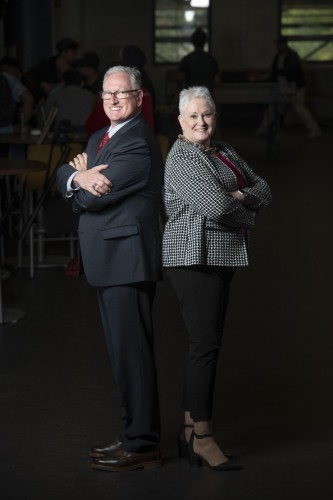 The Norcross’ weren’t really encouraged to continue their education beyond high school. When it was time for college, UHD Alums Jay and Zoe Norcross took two different paths.

In 1974, Zoe enrolled in Bryman College, a vocational school where she studied to be a dental assistant. Jay enrolled in another Texas university, but only stayed a semester.

“It was the socially acceptable thing to do, but I wasn’t emotionally ready for it,” Jay recalls. “I went one semester. I came back home and went to work.”

Growing up in Dayton, Texas, the family eventually made their way to Houston, where their parents operated two small grocery stores.

Ironically, their sibling rivalry didn’t surface until, as adults, they decided to attend the University of Houston-Downtown (UHD).

After the death of their mother in 2012, Zoe decided to enroll full time at UHD to complete the 30 hours she needed to graduate.

“When they evaluated my credits, I only lost three credits among all the credits I had previously earned,” Zoe said. “I was told that no one ever comes in and only loses three credits.”

Jay didn’t realized his big sis was in school until he received an invitation to her graduation in 2013.

“All of a sudden, she was graduating from UHD,” Jay said. “My wife and I went to her graduation, and that’s when I said to myself … if she can finish, I can finish.”

It was then Jay set two goals for himself. The first was to complete his bachelor’s degree faster than Zoe. The second one was to earn a higher GPA.

Zoe, laughing at her brother, chimes in.

“He surpassed me,” she added. “When you’ve pursued a goal for 13 years, you really don’t worry as much about your GPA, just as long as you graduate.”

Both siblings earned Bachelor of Science degrees in interdisciplinary studies, with Jay graduating in fall 2017— completing his degree in four years.

Jay has spent nearly 20 years working abroad in the oil and gas industry. Presently, he is president of Kiewit OGC Engineering. Zoe works in the Family-Based Safety Services area of Child Protective Services, a position she’s held for the past five years.

Jay admits that he wants to make it to the finish line before his sister. “Oh, he’s going to beat me,” Zoe laughs. “I’m not in a hurry.”

(Reprinted from the latest edition of UHD Magazine available on campus and online.)