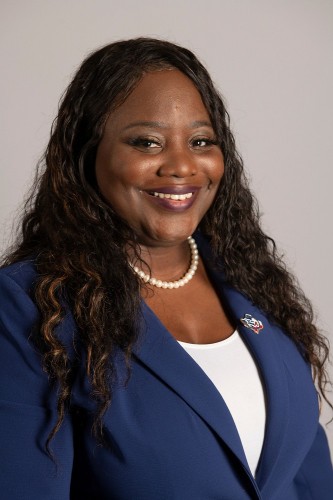 Shay Tatum is not one to let grass grow under her feet. Her drive has led her to work on three degrees in the past seven years while working and raising a family and still ask herself, “What’s next?”

The answer to that question, at least for now, is being elected the first African American female president of the University of Houston-Downtown Student Government Association.

Tatum, a Master of Arts in Nonprofit Management student, is proud to hold this honor and notes the coincidence in timing.

“This is the 400th anniversary of the beginning of American slavery, and I am the president of the 40th administration”

Tatum is also a non-traditional student and spoke about the importance of representing that segment of the student body.

Tatum began her college career after high school. As the youngest of seven daughters, she was given the same choice as her sisters. Her mother told them all they could decide between college and the military. Tatum chose college and moved to Arkansas where she attended Philander Smith College, one of the oldest historically black colleges in the country, before going to the University of Arkansas.

Her path to her degree took a slight detour while she started a family and earned her cosmetology license. Although Tatum enjoys being a hairstylist, in 2012, she decided she wanted to continue her education.

She was motivated by people in her life that told her she could not do it or it would take too much time.

“People don’t understand how much motivation it is when someone tells you or tries to make you think that you are less than because you don’t have an education or money or a means,” Tatum explained. “And that is so much motivation for me.”

At this time, Tatum had already been teaching herself sign language, inspired by seeing a friend’s parents who spoke with their hands. She was so successful that she even began translating at her church each Sunday.

Tatum earned her associate’s degree in sign language interpretation from Lone Star College in 2015 and immediately asked herself, “What’s next?”

She enrolled at UHD in 2015 and because she is community service oriented, she began to look for ways to get involved on campus. She tried to join a Greek organization, but when that did not work out, she immediately sought out a new opportunity in SGA.

Tatum was determined. The first few months she stopped by the SGA office, no one was there. Finally she showed up at a general assembly meeting and has been involved ever since. Tatum began as a director of Student Engagement before becoming a Senior Senator then served as Speaker of the House. The road to leadership in the SGA was bumpy, but Tatum persisted.

She said that setbacks just encouraged her to keep trying.

“I am a stick to it kind of person. If I say I am going to do something, I am full steam ahead,” Tatum declared. “As soon as someone tells me I can’t, I am going to figure out how to do it.”

Tatum received her bachelor's degree in communication from UHD in 2017 and true to form asked herself, “What’s next?”

The next semester she began her Master of Arts in Nonprofit Management which dovetailed nicely with her outside work as founder of the nonprofit Pretty Girlz Rock. Her organization focuses on opportunities and support for girls from 11 to 18. It provides mentoring, STEM workshops, and one extension, Pretty Girlz Can, provides support and scholarships for girls who have had cancer.

This is Tatum’s last year as a graduate student and she is already thinking about what’s next. After she gets her nonprofit running smoothly, she plans on running for City Council, a level of government she finds important because a leader can get to know their constituents and make a concrete difference in people’s lives.

Tatum and her vice-president, Jason Lillie, have plans to help the student body in several ways this year. Their main initiatives for this year are parking solutions, student retention, textbook affordability, and connections on campus.

Tatum feels that campus involvement is important for everyone.

“People find a connection with things they have ownership in, so we want to help people feel more ownership here,” she says. “Let’s create a sense of ownership at this school, make everyone an ambassador and Finish UHD Strong”