The President's Lecture Series on Justice, Equity, and Inclusion launched in 2021 with in-house and third-party experts joining UHD to discuss critical topics facing campus communities today. A key component of the series was to “build a more equitable and just environment through grant-supported, student-led outreach.” To that end, all University students were invited to submit a proposal for a Justice, Equity, and Inclusion mini-grant that would provide support and resources to design community programs focused on racial, economic, and social justice issues impacting members of the UHD student population. Six student projects have been awarded a mini-grant so far. The first grant recipient, Kaethleen Siguenza, is featured in this story. Other projects and recipients will be covered in future UHD News stories. One of the projects and its grant recipient, Kaethleen Siguenza, was covered in a previous UHD News story. Today, we learn about Lauren Parker.

Lauren Parker is motivated by kindness and a desire for justice. A first-generation college student, Parker’s parents instilled in her the importance of using her education to help those around her and to focus beyond herself. This upbringing prompted her to major in Criminal Justice in the College of Public Service. 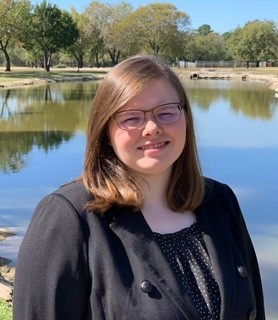 But simply learning about the law wasn’t going to be enough. Parker wants to use her degree to attend law school to earn a master’s, and then pursue a Ph.D. in Criminal Justice. Her goal is to reform the system. “It’s bleak right now,” she said. “We have a high number of people being sent to prison and high numbers returning to prison. We need to focus on rehabilitation. Society needs to emphasize rehabilitation and give people a second chance to prove that they have changed.” Parker is a member of UHD's Honors Program, Alpha Phi Sigma (Criminal Justice Honors Society), the Pre-Law Association, and the National Society of Leadership and Success.

Parker met some “justice-involved” students during her studies. She confessed that she was surprised because the students were honor students and very involved in campus life. However, they shared that they felt like they needed to hide their past and were afraid of the stigma, the preconceived notions, and not being given a chance to be understood.

“We have these amazing programs for single parents, minority students, transfer students, and first-gen students, etc. We have separate programs for students with different majors, like the arts or criminal justice. These formerly incarcerated students are without a specific program. They feel that no one sees them.”

When Parker heard about the Center for Community Engagement & Service Learning’s Student-Led Success & Equity mini-grant program, she knew the opportunity was right to educate the student body about the unique challenges faced by some of their peers. Desiring justice for these individuals, she titled her project “Seeking a Second Chance.”

With the funds from the mini-grant, Parker created posters and flyers (see photo) to put around campus to bring attention to the situation. The reaction from students and professors, she said, was amazing. “As I was hanging the flyers, I heard people’s reactions as they stopped to talk about it: ‘I didn’t think of that,’ and ‘I wonder if I know anyone in that situation.’” 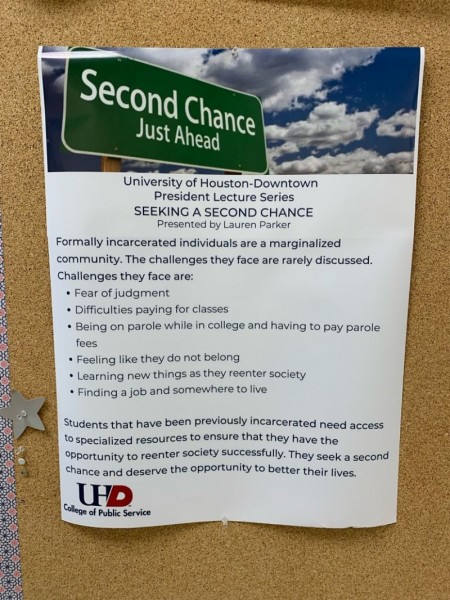 Formerly incarcerated students face unique barriers to pursuing higher education that others might not consider: loss of access to financial aid, difficulty finding a job or securing housing, and other monetary obstacles such as parole fees and court costs. These challenges are in addition to their feeling that hiding their past is a prerequisite to entering society and gaining access to the same opportunities as non-justice-involved students.

“[These students] are sometimes afraid of what professors will think and are worried about being perceived differently even if they are otherwise successful, an honor student, a 4.0 student.” The goal, Parker said, is to “minimize bias, increase understanding, and change perspectives.” She also wants people to ask themselves how they can support friends in that situation.

“I want formerly justice-involved individuals to have a place where they can receive support and be surrounded by others in similar situations to help each other out,” she said.

Parker envisions UHD graduates who were at one time incarcerated or justice-involved returning to campus to speak to current students and encourage them, giving them hope for a better future and for success they never thought they could accomplish.