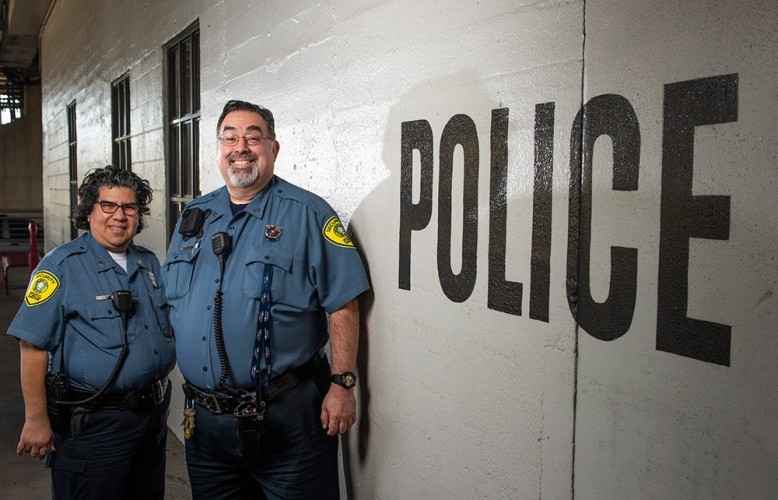 The siblings, who are one year and 12 days apart in age, really enjoy working at UHD’s Police Department (UHDPD). Yvonne has been employed at the University since December 2017 and credits herself with getting her older brother Stephen on board in May 2018 as her co-worker.

“After my orientation, I had lunch with Chief (Michael) Benford and I told him I had two candidates for security officers and one was my brother,” she said.

Shortly thereafter, Stephen applied at UHD. Then, everything then fell into place after that, according to Stephen, who gained his security guard experience when he was a senior clerk for the cities of Houston and Pearland Municipal Court systems.

“In those experiences, I sometimes had to be a bailiff and I would guard the courts and the judges,” said Stephen.

He also serves as the UHDPD's first chaplain.

“When I was hired, I was told I was hired because of my theology degree and that I would be the chaplain,” Stephen said, “That was a nice curve ball, coming out of left field.”

Stephen earned bachelor degrees from Houston Baptist University—one in Christianity and the other in Vocal Music Performance. He puts both to use at UHD through his chaplaincy work and being asked to sing the National Anthem at many UHD events. Presently, he keeps the One Main Building secure on second shift, but will soon will be leaving his post to become a police dispatcher.

Yvonne also works similar hours with her post at the Commerce Street Building and she absolutely loves interacting with all of the cadets that go through the police academy.

“I’ve seen a majority of our cadets graduate,” she said, “I also enjoy talking to them about all of their ups and downs and offer encouragement to them—I’m like their mom, aunt or big sister.”

The Vegas' come from a large family and are just two of 11 siblings—Yvonne also is a twin. They truly love working for UHD and enjoy working and commuting to the office together. Both also have perfect attendance at UHD.

"Our University is very blessed to have them," said UHDPD Lt. Frederick Varela, "I don’t think our University knows how much they work."