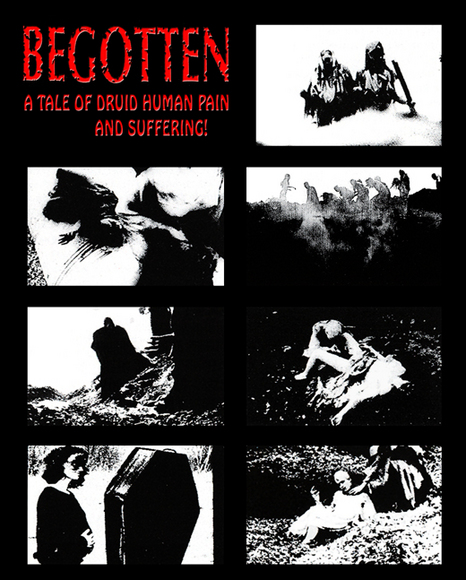 If you're looking for a fright, attend ART/HORROR, the third annual UHD Halloween Film Screening on Halloween night!

This year's films turn to the more experimental and artistic strand of horror, featuring pictures that elicit the goose bumps, shivers, and gasps associated with classic monster movies, but which do so in a way that is closer to fine art than character-driven narrative. This year's films pose questions about the relationship between genre, affect, beauty, the grotesque, representation, and, above all, the cinematic purpose of horror in general.

The night's feature will be BEGOTTEN (1990, US), director E. Elias Merhige's highly unusual and rarely seen, black and white horror picture. Named one of TIME's "Ten Best Pictures of the Year" by Richard Corliss in 1991 and described as "[o]ne of the ten most important films of modern times" by the writer and critic Susan Sontag, BEGOTTEN is an unforgettable horror film like no other.

Once It Started It Could Not End Otherwise (2011), a short film by the extraordinary artist Kelly Lynn Sears, will open the event. Sears is an experimental filmmaker who was recently a Core Artist in Residence at MFAH's Glassell School of Art. Her work has been screened at Marfa Film Festival, the Museum of Fine Arts-Houston, MOMA, Sundance Film Festival and the Ann Arbor Film Festival, among other places.

The event is free and open to the public and is sponsored by the UHD Cultural Enrichment Center and the CHSS film studies minor. Popcorn and soda will be available while it lasts. Bring a blanket, chair and a picnic and costumes are encouraged. The rain location is Wilhelmina Cullen Robertson Auditorium.

These films are only suitable for ages 18 and up.