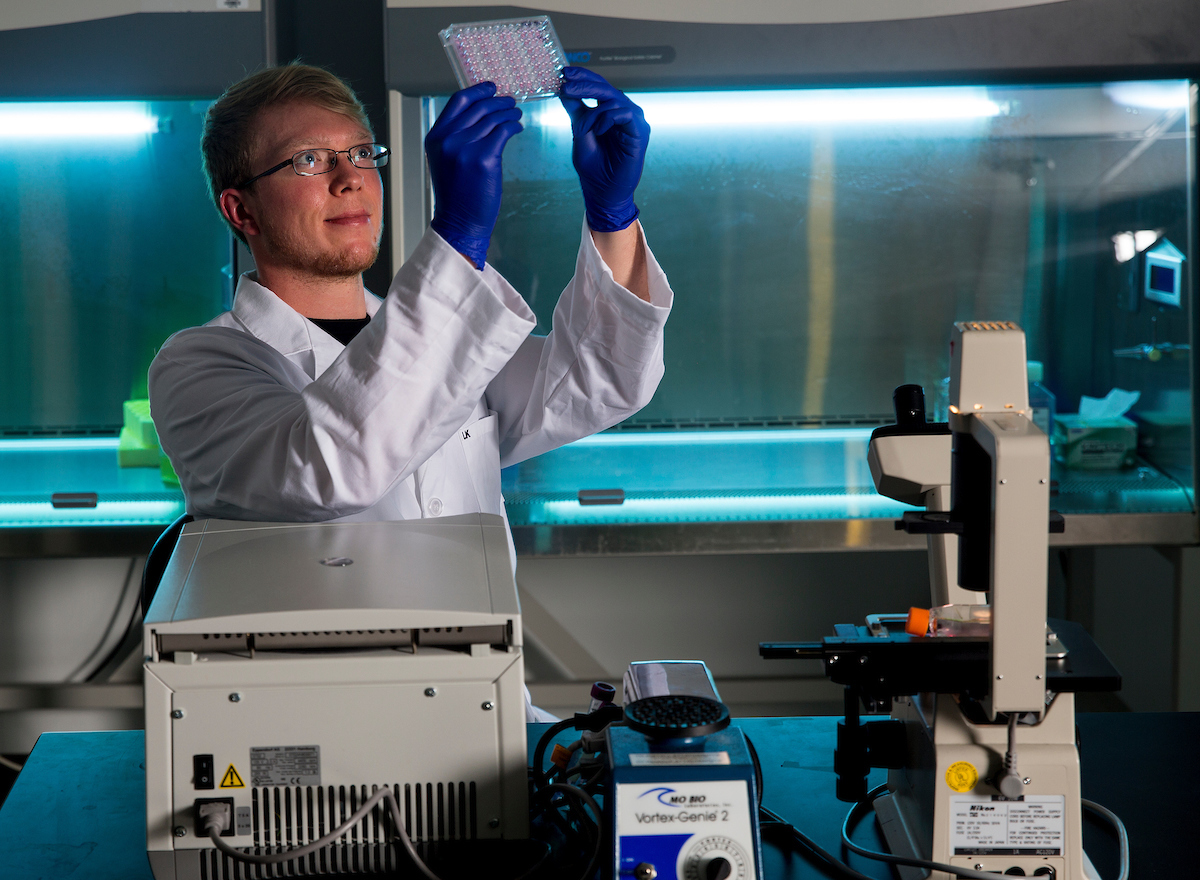 To the layperson, undergraduate research may seem similar to the projects high school students submit to science fairs, but it is not. These projects, often critical parts of a faculty member's research, add context and experience that is important to a student's education. To three Abramowitz Research Scholars at the University of Houston-Downtown (UHD), undergraduate research was a gateway to an unimagined world that provided the experience and perspective needed to inspire confidence and launch them to heights they had not previously dreamed possible.

The Joan S. Abramowitz Undergraduate Research Scholarship is awarded to one outstanding undergraduate student per year. The award provides $3,000 per student, allowing them to conduct research in a laboratory at the University of Texas Health Science Center at Houston (UTHealth), Baylor College of Medicine or another local research institution during an eight-week period during the summer.

Linus Klinger shared that he had no idea what he wanted to study when he started college. During his freshman year, he discovered a passion for research while enrolled in a biology lab taught by Rachna Sadana, assistant professor and assistant chair in the Department of Biology.

"I actually hated biology in high school," Klinger admits. "But, since I started working with Dr. Sadana, I've fallen in love with analytical processing in science, and I am now pursuing research as a career."

Klinger further refined his career aspirations while studying retinal development at Baylor College of Medicine under Ross Poché, an assistant professor of Molecular Physiology and Biophysics, during a summer internship made possible by the Abramowitz award. He plans to graduate in May with a Bachelor of Science in Biology and is now applying to both optometry and graduate schools, which he says wouldn't have happened without the support he received at UHD.

"I feel that the greatest driving force behind you as a student is a strong supporting network, and there are so many faculty members at UHD that want you to pursue your passion," he explains. "The scholarship allowed me to do research in any lab in Houston. I wouldn't have dreamt that was possible, and yet it is happening to me."

Caroline Barbosa was also undecided about her academic direction when she started college. Barbosa, along with her sister Rebecca, chose to attend UHD because of its diversity, affordability and proximity to her home.

"My sister and I both attended UHD at the same time," she explains. "There are so many students at UHD who look like us, and we knew it was the right choice."

Barbosa first learned of the Abramowitz Scholarship while participating in the Scholars Academy, a program in the UHD College of Sciences and Technology (CST) that focuses on scholarship and student success for minority undergraduates in science, technology, engineering and mathematics (STEM) majors. Once accepted, she was mentored by Poonam Gulati Salhotra, associate professor in the Biology Department, who inspired her.

"It meant so much to know that there was someone who believed in me even more than I believed in myself and would advocate for me even when I couldn't see my own potential," she says.

On receiving her award, Barbosa worked with William Margolin in the Department of Microbiology and Molecular Genetics at UTHealth, studying proteins that help facilitate bacterial cell division. She said that the experience exposed her to new methods and helped her develop her technical skillset in the lab.

After graduating with a bachelor's degree in Microbiology and a minor in Chemistry, Barbosa made the choice to give back to her community. She now works as a Teach for America Corps member in Houston's Marshall Middle School.

"I am currently looking at different master's programs with the overall goal of continuing to work in low-income communities, help students in need, and help push them to be more than society tells them they can be," she explains.

Jillian Losh knew exactly what she wanted to study in college … theater.

But, after following her dream at another university for a year, she decided she loved theater but didn't actually want to pursue it as a career.

"I was taking a year off of school and working in a veterinarian's office when I really fell in love with doing the lab work," she explains. "I found UHD while looking for universities with good microbiology programs, and Houston seemed like a great place to be!"

Losh was mentored by Lisa Morano, professor in the UHD Biology Department, and her decision to study microbiology was reaffirmed with every class she took. Two years into her education at UHD, she was empowered by the Abramowitz Scholarship to research with Danielle Garsin in the Department of Microbiology and Molecular Genetics at UTHealth.

"Dr. Morano was the first person who ever told me I would make a great Ph.D. student," Losh shares. "I had never considered this for myself. The experience showed me that getting a Ph.D. is not something that was far beyond my intellectual capabilities. This was eyeopening, and it was meaningful to see a side of science that I'd never seen before."

Losh graduated in 2012 with a Bachelor of Science degree in Microbiology and a minor in Chemistry. She is currently enrolled at UTHealth in the Graduate School of Biomedical Sciences working towards a Ph.D. in Microbiology and Molecular Genetics. She shared that she got a great start at UHD that positioned her for success in graduate school.

"I'm now taking classes with students from very prestigious schools, and I've never found that I was behind them academically at all," she says. "Attending UHD and receiving the Abramowitz award was a great learning experience that allowed me to grow as a scientist."

Joan Abramowitz served on the UHD faculty for 20 years, including nine years as chair of the Microbiology Program. Upon her death in 2004, Joel Abramowitz established the Joan S. Abramowitz Undergraduate Research Scholarship in her memory. She is described by colleagues as an open, gregarious and dedicated faculty member who was foundational in connecting the Department of Natural Sciences to research institutions in Houston.

"Joan was instrumental in building connections and partnerships in the Houston Medical Center," says Dean of the CST Akif Uzman. "Most importantly, she was a spectacular mentor to our students."

Gulati also knew Abramowitz well, describing her as "warm and giving with a great sense of humor."

At a reception on July 26, 2016, students and faculty gathered to celebrate the accomplishments of the Abramowitz Research Scholars, recognize the support of the Abramowitz family, and remember the legacy of an outstanding faculty member. Among those in attendance were Joel Abramowitz, his wife Rita Berger, and Sebastian Abramowitz, their grandson.

"When the students talked about what the scholarship meant to them, I was just blown away," says Joel Abramowitz. "If giving them a few thousand dollars has enabled them to improve their lives, that's an incredible return on investment. It made me feel very grateful to be part of it."

"Joan would have been overjoyed," he adds. "Her students loved her, and the faculty loved her. She was a very good teacher, a mother, a mentor, and a spiritual leader to these kids while she was alive, and now that legacy lives on."